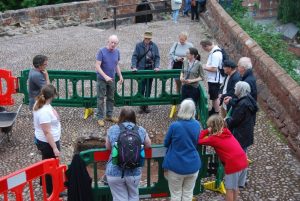 Student volunteers with Nigel Baker and Morn Capper, on behalf of all volunteers at The Shrewsbury Castle Dig 2022

With the Queen’s Baton Relay on 18 July and preparations for the Freedom Day Parade on the 30 July, we have never had so little time to uncover such a fascinating story – but we made it!

It is fair to say that at half past closing on Wednesday archaeologists Nigel Baker and Dai Williams were still working hard to complete the final plans of the motte top. But in the end thanks to Norman and our fantastic Shrewsbury Castle Dig volunteers we filled in the holes with half an hour to spare!

Our first investigations began with the curtain wall, investigating documentary evidence of a short-lived bastion or tower that mysteriously appeared on the Rocque map manuscript of 1746, before disappearing again in later 18th century artistic paintings and prints. Our trench uncovered the wall footings, but with the signs of Victorian household occupation and industrial material such as charcoal and clinker going directly onto the natural surface of the hilltop. The mystery of this disappearing bastion may lie with a collapses and rebuilding of the curtain wall, which recent investigations by Historic England for the Conservation Plan has shown had happened historically.

After two days of drilling through the cobbles, the orange clay of the motte top was gradually revealed. Excavations uncovered dark brown slots and other features were cut into the orange clay of the motte top: post-holes, a post-pad and slots for sleeper-beams of buildings, generally of the period were uncovered, containing animal bone and local unglazed cooking-pots in use during the late 11th to mid-13th-century. In places these features were intercut or were overlaid by traces of Thomas Telford’s re-imagining of the motte top.

This is evidence for the remains of a series of wooden buildings on the motte over an extended period of time.

Although remains of the ‘great tower’ – the timber tower that collapsed in the third quarter of the 13th century – were not positively identified, not all features were fully within our 2m trenches.

Some of the post-holes were packed with a distinctive crumbly green sandstone (Coed-yr-Allt beds) obtained nearby from the River Severn. This has recently been identified by research since 2019 as the stone most likely used in the first phase of building the curtain walls and converting the Norman earth-and-timber fortress into a stone castle.

Talking with visitors, Dr Capper emphasised the impact on the landscape:-

“This huge mound was natural material re-deposited from hilltop and the motte ditch below that we uncovered in 2019. It used the large oak beams which for centuries were available for building in this region and ferried along the River Severn. Fortifications were built over the Saxon features we uncovered in 2019 and destroyed 51 properties. Most likely much of this hard labour was forced on local workers by the Normans in the aftermath of the Battle of Hastings in 1066-67. It is hardly surprising, then, that Eadric the Wild was able to find support from Chester and from Welsh neighbours for rebellion in 1067 and 1069 despite the brutal harrying of the North.”

This research has shown over the last three seasons how the castle was built and rebuilt in timber and then in stone, with royal resources it became a comfortable strategic base for King Henry III’s campaigns. When the Tower, which offered such a commanding view of the March, collapsed with the motte into the River Severn, documents describe the urgent spending for it to be rebuilt.

Despite re-use in the Civil War the castle was not slighted (damaged beyond military use), instead being re-developed as a fashionable residence by Thomas Telford.

Was it worth the effort?  Student volunteers certainly think so, with opportunities from excavating alongside professionals and lecturers in archaeology and heritage, to excavating and processing finds with the National Trust volunteers, developing media and running our heritage events. With their efforts contributing to live research, some have taken part in describing archaeological contexts and in creating a survey profile of the standing curtain wall of the castle, as well as displays.

All of the volunteers have spent time each day with the public, explaining our finds or giving tours, and planning our Saturday Open Day for over 700 visitors.

Kelly from the Chester Archaeology and Heritage Masters said:-

“It was such a thrill to be able to show people things about this building you don’t ordinarily get to see.”

Finds from 2019 and 2020 seasons were co-curated by students at University Centre Shrewsbury with Dr Capper and curators into a popup museum exhibition, which can be seen alongside painted landscapes that gave us clues to the castle history at Shrewsbury Museum and Art Gallery this summer: https://www.shropshiremuseums.org.uk/smag/opening-and-admission-at-smag/