A consultation has begun this week into plans for a temporary – five-year – traveller transit site at on the north-west edge of Shrewsbury, with people asked to share their thoughts about the proposals. It runs from 1 October until 30 November [2020].

The proposed site  is owned by Shropshire Council and lies close to Ellesmere Road roundabout between the A5124 Battlefield Link Road and the A528 Shrewsbury Road. The site itself would be screened by a belt of trees.

A transit site within Shropshire is being proposed for several reasons.

Secondly, national planning policy for gypsy and traveller sites requires local authorities to identify and to seek to meet the permanent and transit accommodation needs of gypsies and travellers via the planning process.

Lastly, though the police have powers to evict unauthorised campers, these are discretionary. 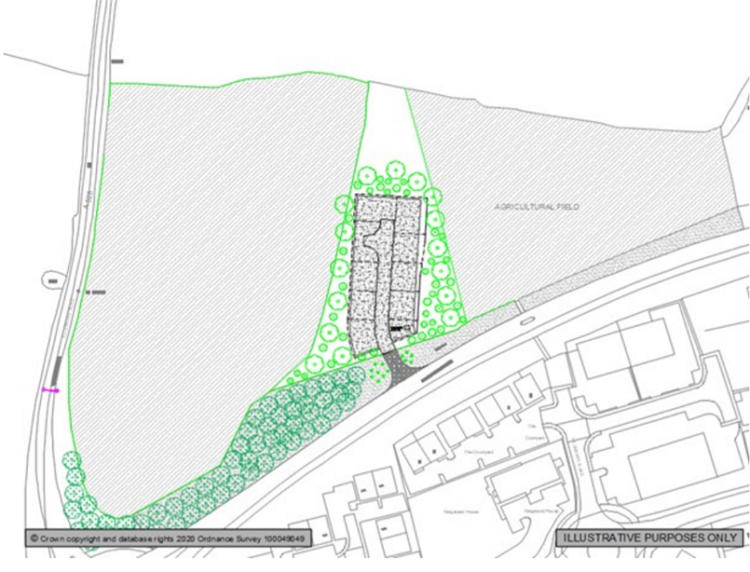 An illustrative plan of what the site may look like

“Over the last five years Shropshire Council has seen a number of unauthorised encampments in and around Shrewsbury and a significant number pitching on high profile locations such as the Park and Ride sites, Battlefield Enterprise Park and the retail business car parks, impacting both on the public and private sectors.

“Some areas within Shrewsbury experience regular unauthorised encampments, which can cause disruption and conflict locally, and can also be expensive and time-consuming to clear. And we cannot evict unauthorised camps if we have no provision to move them to.

“There are a number of powers Shropshire Council can use to evict problematic groups but at times the process can be lengthy and tends to be a short-term fix. The delivery of transit provision could, within a reasonably short timescale, deal with the ongoing and costly issues associated with such encampments and help ease the impact on local communities and businesses whilst longer term site provision is considered.

“A formal consultation is now underway and will be held over the next two months. It’s an opportunity to have your say and raise any queries. We welcome all views and thoughts on the proposals, as well as any questions.”

To take part in the consultation, go to www.shropshire.gov.uk/get-involved, where the full proposals can be read, e-mail propertystrategy@shropshire.gov.uk or write to the Property Strategy & Review Team at Shirehall in Shrewsbury.