Mr. Ellery, HM Senior Coroner for Shropshire, Telford and the Wrekin, held two Treasure inquests today investigating the circumstances of two recently reported finds from North Shropshire. Both these treasure cases represent ordinary every day finds. All were reported through the Portable Antiquities Scheme having been found by responsible metal detecting

This small but very decorative medieval silver brooch was discovered on ploughed land in the Whittington Area, near Oswestry by an amateur metal detector user. The treasure report states that the brooch consists of a circular-sectioned frame with a cut constriction in one side to accommodate a silver pin. There is no pin rest on the frame and where the pin sits there is no evidence of excessive wear. The frame of the brooch is decorated on both faces. The upper surface has a repeated pattern of well-cut symbols. The reverse face is decorated with a zig-zag line which is poorly applied and irregular in nature forming a circlet of angles. The brooch is preserved in extremely good condition. It is a mid-grey colour with areas of dark grey tarnish or slight polished sheen in places. 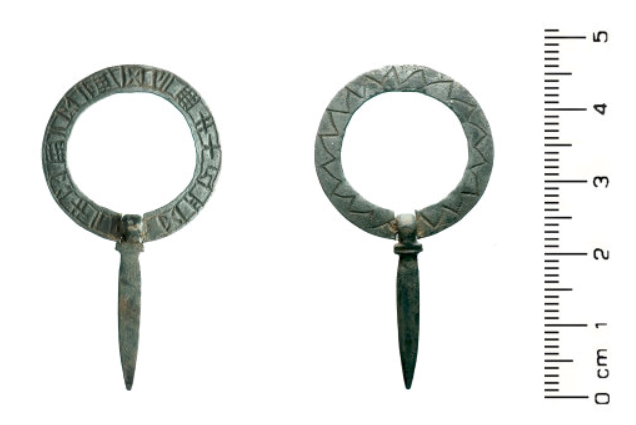 The silver medieval brooch has been declared treasure.

Simple undecorated and decorated annular brooches such as this example have been found in archaeological circumstances dating from the later 12th to 14th centuries (1150-1400). This indicates their long use as an item of everyday dress.

Images of the brooch have been viewed by Dr Malcolm Jones, a medieval specialist in inscriptions, who has indicated that the design of the symbols could be considered to be pseudo-inscription or a pleasing pattern. During the period there were high levels of illiteracy and the fact that the pattern is letter like might be good enough for the wearer.

“While this brooch is small, it is perfectly formed with neat and detailed design. The patterns may have been deliberate to echo letters or suggest archaic / magical symbols. The fact that it has survived so well in the Shropshire soil for the past 700 years or so, is amazing.

“Although we may never know who owned it – they probably would have missed it and because it has so little wear it is most likely to have been lost soon after it had been made. Such small pretty brooches were worn by ladies of every social rank – other examples reported from the county have either been plain or have included religious inscriptions – so this example is a little different from the norm.”

This small Roman coin hoard was reported to the Finds Liaison Officer for Liverpool, Manchester and Cheshire, Ben Jones. Once again, the find was discovered as a result of responsible metal detecting by an experienced amateur detectorist. 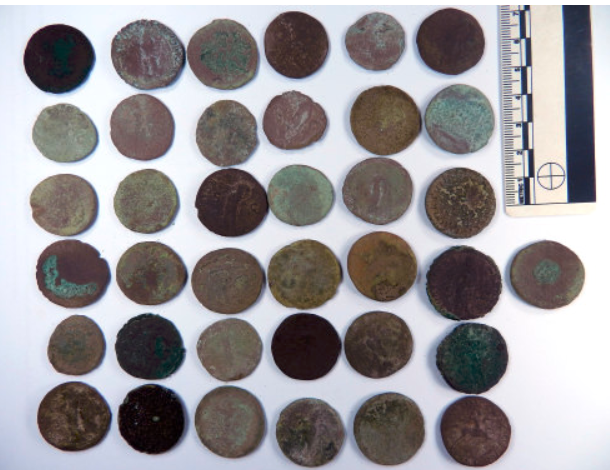 The hoard consists of 37 small denomination brass or copper alloy Roman coins known as Dupondii and Asses. The small hoard was deposited during the reign of the Emperor Trajan (AD 98-117) after AD 111. All the coins represent normal / everyday coinage in circulation during the late 1st and early 2nd centuries being dominated by issues struck under the emperor Domitian (AD 81-96) and Vespasian (AD 69-79).

“The face value of this hoard is low and it represents everyday spending money that Shropshire’s resident Roman’s would have had in their pockets. As such it is a very ‘ordinary’ treasure but one that we can all relate to – the odds and ends of small change saved and cherished to be spent in times of need or on a rainy day.

“In terms of spending value, a Roman legionary soldier was paid 300 denarii a year (which is the equivalent of 4,800 Asses) – so these coins represent no more than 2-3 days legionary pay. Looking at it a different way, a loaf of bread would have cost two Asses and for the same price you could have bought a litre of wine. So, in many ways these coins wouldn’t get you very far … but that is what makes them a treasure.”

Shropshire Museums’ have expressed an interest in acquiring these finds with the hope of displaying them in the Roman Gallery at Shrewsbury Museum and Art Gallery.

Now both these finds have been declared treasure they will be valued by the DCMS treasure valuation committee to establish a finders and landowners reward. Once this is set, Shropshire Museums’ will work towards raising the necessary funds, through grant and donations, so that these artefacts can be saved for the people of the county.

More information and images of the finds can be found here: please note that images are used with permission of British Museum’s Portable Antiquities Scheme

More information about PAS and Treasure process can be found here.

More Information about Shrewsbury Museum and Art Gallery can be seen here.