Natalie Cumming, author of ”The Fiddle”, joined schoolchildren, Shropshire Councillors, and representatives of the Christian, Jewish and Muslim faiths in ceremonies held on Friday 25 January 2019 to commemorate Holocaust Memorial Day in Shropshire.  This year’s theme of “Torn from Home” was particularly apt for Mrs Cumming’s moving true story about how her Aunt Rosa survived the Holocaust, playing the family violin in the Women’s Orchestras in three concentration camps during the Second World War. The violin was recently repaired, and the schoolchildren were able to hear a recording of it playing a special piece of music, “Rosa’s Wishing Waltz”, which was composed to mark its restoration.

The council is growing a cherry tree orchard of remembrance with schoolchildren across Shropshire, which began with planting a tree with Mereside CofE Primary School in Shrewsbury in 2015. A different primary school is chosen each year to plant a tree that will mark the Holocaust and other genocides, with the aim being to eventually cover all points of the compass in this very large rural county. St Peter’s Primary and Nursery School in Wem is the 2019 school, with the event supported by local Shropshire Councillors Chris Mellings and Pauline Dee. 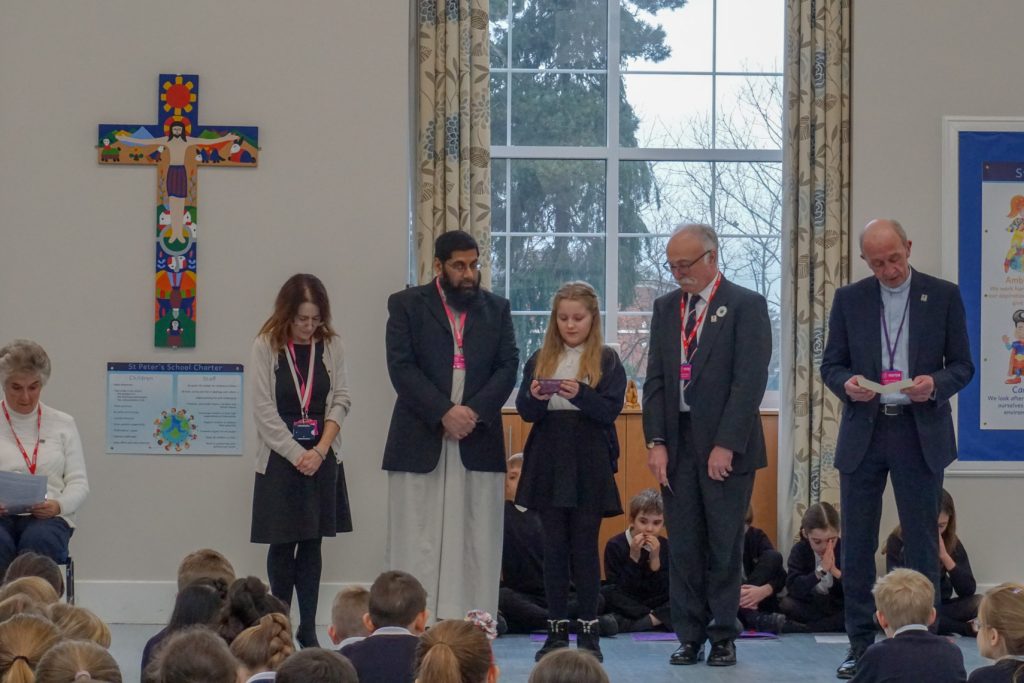 A special assembly saw children from the school sharing the work that they had done to mark the Day, and hearing from Mrs Cumming, Councillor Mellings, Mark Michaels of the Jewish faith and Sohayb Peerbhai of the Muslim faith. Local vicar, Father Nick Heron, read a prayer whilst one of the schoolchildren, Egle Palubinskaite, held a candle. Four other children, Qosay and Oday Al Melhem, Emily Paul, and Tiarna Price, joined with the guests and with Councillor Connie Grainger, Mayor of Wem, and Mr Ian Nurser, CEO of Empower Trust, to plant the tree in the centre of the Spiritual Garden at the school. 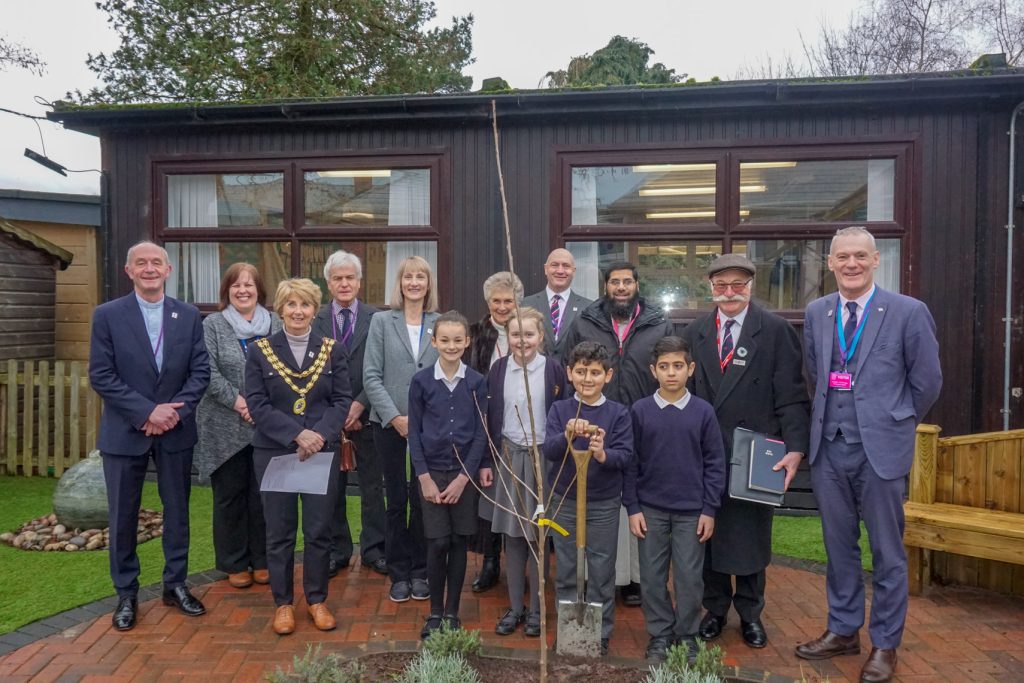 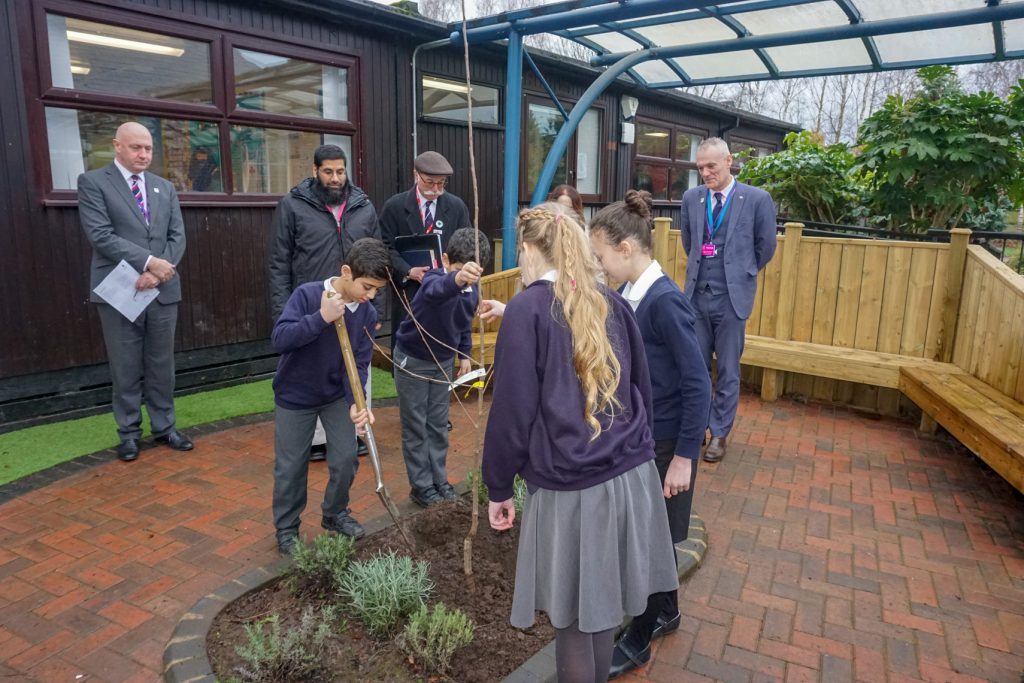 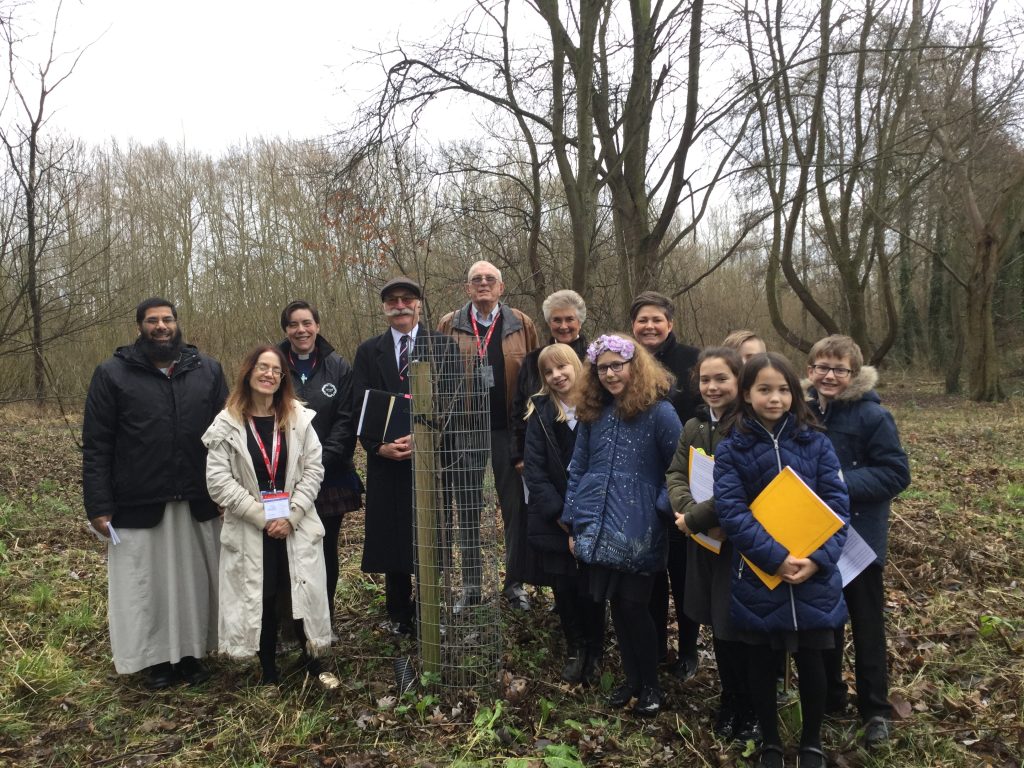 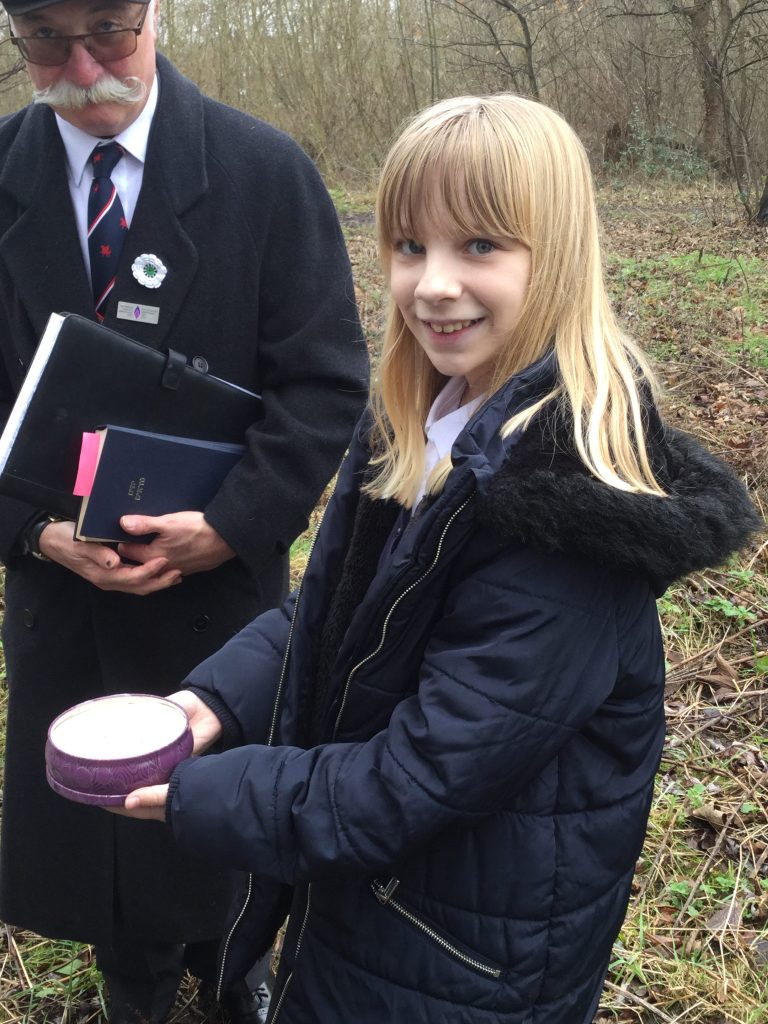 “This year has marked the planting of our tenth cherry tree in Shropshire. This may not seem like a high number, but each tree represents a community. Each child, as they grow like the tree, is encouraged to think about and reflect upon their roles as members of their families and as members of their school community and the wider community, and the part that they can play in making their world a better place.

“This will mean that things like the Holocaust and other genocides will be less likely to happen. We must never forget about what did happen, and that is why we plant these trees and why we must all strive to be kind to each other and to respect each other’s beliefs.

“We will do our best as a council to help each and every child in Shropshire to feel welcoming in their communities and to flourish like these trees.”

“For the council the theme of “Torn from Home” is of particular relevance to us, because of the role that we play in helping and supporting children and families who are in need.

“We already support a number of Syrian refugee families here in Shropshire, and we will be welcoming more families during 2019 who have been torn from home in Syria. Along with Wem Churches Together, we have been particularly pleased as a community to welcome and actively support families settling in Wem. I was glad to have the opportunity to also tell the children of St Peter’s School about how German Jewish children took refuge in Wem, at what is now the Woodlands Centre, as part of the Kinder Transport scheme just before the Second World War.

“I was delighted to visit The Priory School on Monday 28 January as part of the Holocaust Memorial commemorations. It was a very moving experience to hear Natalie Cummings reading a summary of her book The Fiddle, and it was inspiring to see the pupils so engaged with the whole event. I must give credit to Head of Humanities Westleigh Jones for his input and continued efforts around this topic, and it is obvious that the Holocaust is not just remembered around Holocaust Memorial Day but throughout the year.”

This sentiment was echoed and reinforced by Fiona Russell, headteacher at St Peter’s, who said:

“Thank you so much for organising such a moving and memorable event for the staff and children of St Peter’s. It proved that even such an incredibly sensitive and emotive subject as the Holocaust is appropriate for children of this age if taught in the right way, and all of the people who contributed to the service got the tone exactly right. It is vital that this horrific period in our history is remembered and, thanks to your efforts, it absolutely will be at St Peter’s. We now teach it every year, and indeed throughout the year as we care for our tree.”

The background here is that the council is continuing efforts to grow a cherry tree orchard of remembrance across Shropshire, working with primary and secondary schools, inter faith forums and local Shropshire Councillors. We identify a primary school each year, and are seeking to spread the orchard across the county.

The orchard had a growth spurt in 2016, when we were also able to provide for five secondary schools to have trees as well, through the Incredible Edible project running that year. Having begun in the centre in 2015, with Mereside C of E School, we have planted in the north at Woodside Academy in Oswestry, and in the south at Bishop Hooper School in Ashford Carbonell, where a second tree, kindly donated by the South Shropshire Interfaith Forum, had to be planted in 2018 after rabbits ate the first one. The tree for the centre and west of the county was planted at Trinity C of E School in Ford in 2018.

This year’s tree was planted at St Peter’s C of E School in Wem, representing the north and east of the county. In 2020 a school in the south and west will be chosen, as the council continues efforts to grow an orchard that will eventually cover all points of the compass.

The events were supported by local Jewish author Natalie Cumming, who has written a book called “The Fiddle”, about her family violin. Her aunt Rosa played the violin in three concentration camps (Mauthausen, Auschwitz and Belsen) and was part of the women’s orchestra in each camp.  The violin was returned to her after being taken away on arriving in Auschwitz.  Violin maker/restorer John Dilworth restored the violin for a BBC programme The Repair Shop. It has now been donated in perpetuity in memory of her aunt and her father to the Yehudi Menuhin school. Well-known violinist Chris Garrick composed a piece especially for the programme called Rosa’s Wishing Waltz.

Mark Michaels of the Jewish community and Imam Sohayb Peerbhai of the Muslim community, from the South Shropshire Interfaith Forum, talked to the children at both schools to find out what their schools had been doing on the theme. Special prayers were read by Carole Marsden, URC Minister and representative of the Shrewsbury Interfaith Forum, at the Mereside ceremony, and by Father Nick Heron, the local vicar at St Peter’s school.

In addition, a display in the Foyer at Shirehall ran from Wednesday 23 January to Friday 1 February 2019.

Schools that were planning activities were asked to contact the council, in order that local councillors might lend their support on the day and in order that a full round up might then be possible to share at national level. Woodside School in Oswestry, where the 2016 tree was planted, had to cancel their ceremony due to inclement weather. This has now been arranged for Wednesday 12 June 2019, to mark the 90th anniversary of the birth of Anne Frank. The tree bears a plaque with a quote from Anne Frank, and the school will be doing work in preparation for this event.

For more information about the 2019 theme, please see resources on the HMD Trust website at www.hmd.org.uk.

A round up of previous Holocaust Memorial Day cherry tree planting activity by Shropshire Council is available on the council website at shropshire.gov.uk.