How Pride Month went in Shropshire in June

Shropshire Council is sharing a couple of events and activities that took place during LGBT+ Pride Month (June 2022) in Shropshire.

The first of these was the local initiative “Pride on Pride Hill”, led by the Nationwide Building Society branch located on Pride Hill in Shrewsbury.

Simon Evans, Deputy Branch Manager, has shared with the council that a good number of premises on Pride Hill are now displaying a vinyl rainbow sticker in their window all year round, demonstrating that they offer a safe space for people to openly be themselves without prejudice.

Meanwhile a “Camp Karaoke” event in support of Pride Month was held at Nerdy Café in Shrewsbury on Friday 17 June. Nerdy Café is a safe and welcoming venue that also holds a monthly LGBT+ monthly social evening to support the community. The karaoke event was organised by Phil Davies, who is the brother of a council staff member, and was publicised to council staff as well as NHS and local public sector staff. Jim Hawkins from BBC Radio Shropshire also came along and interviewed Phil and several others inbetween songs. 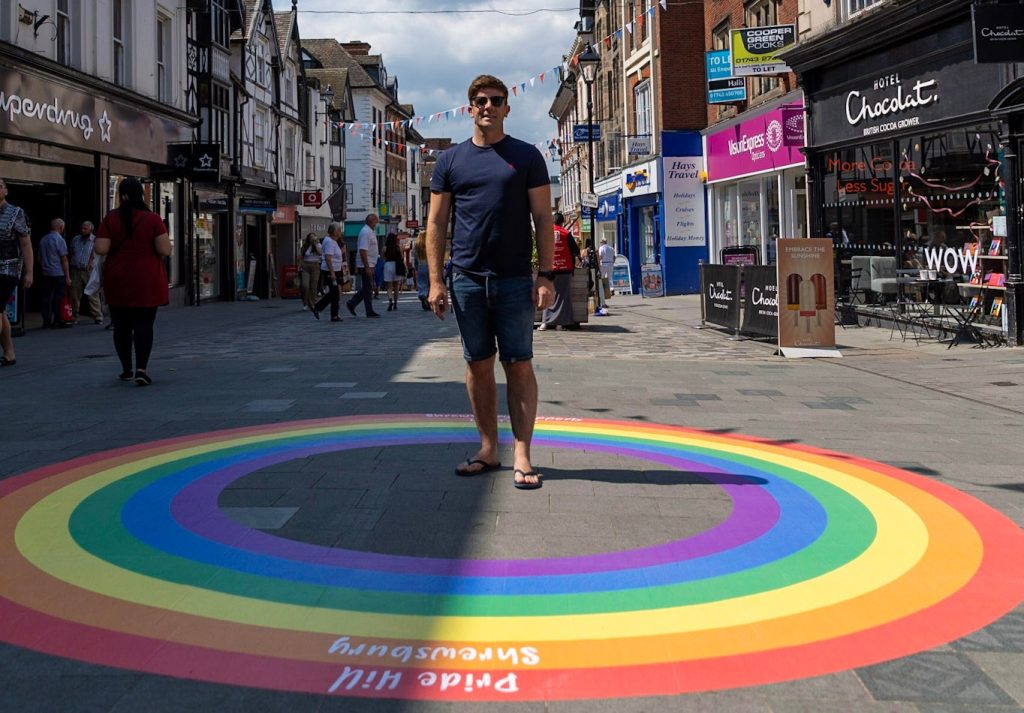 “The Pride on Pride Hill initiative and the Nerdy Café initiative in Shrewsbury are just two examples of efforts led by committed individuals to not only raise the visibility of the LGBT+ community in Shropshire, but also show ongoing support to the diversity of the communities that are living in, working in or visiting Shropshire.

“These efforts are to be commended, and we are sure that there are also efforts by others across our county. The council would like to take this opportunity to say that we will do our best to support individuals and communities, not just in Pride Month but all year round, as part of our commitment to equality and inclusion in a tolerant and open community for all.”

“This has been so great to get people involved. There are a good number of shops now displaying the sticker, and if you walk up and down Pride Hill you can see them in the windows.”

“I had wanted to do something for Pride, as there hadn’t really been anything supporting it in Shrewsbury. I already run a monthly LGBT+ social night at Nerdy Coffee and when I asked Tom (the owner of Nerdy) whether I could put on an event for Pride, he agreed straight away.

“I hit upon the idea of having a karaoke night, as I felt it was a great and fun way of bringing people together and everyone giving each other a bit of mutual support, both things which Pride celebrates. It was also an ideal opportunity to dress fabulous!

“The Nerdy Café evening was a terrific success with people from all over the county and from all across the rainbow attending – over 40 in total.  The event had a wonderfully inclusive atmosphere, with everyone joining in, clapping and cheering along those who took part. What was equally wonderful was how the event raised over £200 for the LGBT+ mental health charity MindOut.“

LGBT+ stands for lesbian, gay, bisexual and transgender. The + is an inclusive symbol to mean ‘and others’ to include people of all identities.

The rainbow flag was created by American artist and gay rights activist Gilbert Baker. It was not until 1994 that the rainbow flag was truly established as the symbol for LGBT+ pride. That year, Baker made a mile-long version for the 25th anniversary of the Stonewall riots. Now the rainbow flag is an international symbol for pride and can be seen flying proudly, during both the promising times and the difficult ones, all around the world. Shropshire Council joined in flying this rainbow flag during Pride Month.

Pride Month is usually celebrated in the month of June is because this was the month in 1969 when the Stonewall riots took place in America. The Stonewall riots changed gay rights for a lot of people around the world. The month is usually celebrated with parades and marches, with people coming together in love and friendship. Pride events also take place at other times during the year.

The Nerdy Café interview of Phil Evans by Jim Hawkins from BBC Radio Shropshire is still available on BBC Sounds. We are advised that it starts at around 1hour 38 minutes:-https://www.bbc.co.uk/sounds/play/p0c9fn1g