Shropshire Council is marking LGBT+ Pride Month, which is a month-long global celebration, with praise for a local initiative in Shrewsbury and with a call for any others to be highlighted to people in Shropshire.

The local initiative, “Pride on Pride Hill”, is being led by Nationwide Building Society’s branch located on Pride Hill in Shrewsbury.

Simon Evans, Deputy Branch Manager, got in touch to say that he has been along to the other businesses on Pride Hill with a letter and a vinyl window sticker, with a suggestion to ideally display the sticker in the window all year round, demonstrating that they offer a safe space for people to openly be themselves without prejudice. So far, ten other businesses are participating in this venture.

“I was heartened to hear about the Pride on Pride Hill initiative by Nationwide Building Society, and absolutely commend such efforts to raise the visibility of the LGBT+ community in Shropshire and show support to the diversity of individuals who may describe themselves as being part of this community.

“The council is proud to raise a Rainbow flag at Shirehall, Shrewsbury to mark our commitment to equality and inclusion in a tolerant and open community for all.” 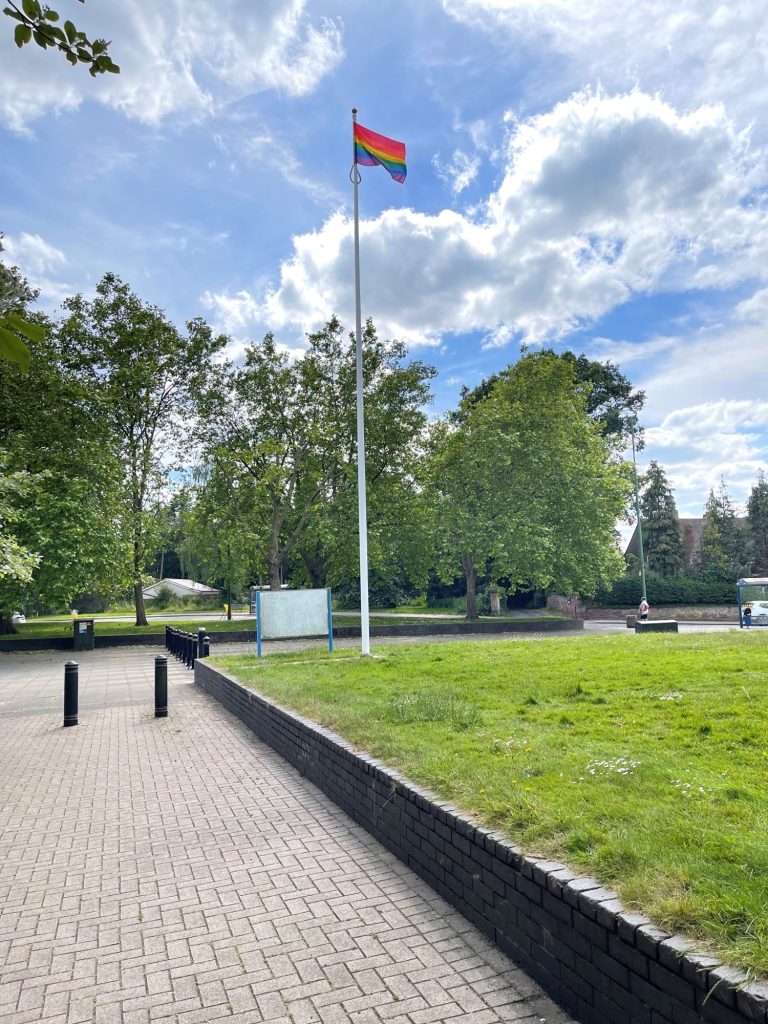 The council is also asking its workforce to try out a quiz about the Rainbow flag and its origins, as part of internal and partnership efforts to raise the visibility of the LGBT+ community.

The quiz has been shared with Nationwide Building Society for use in window display material. It includes questions like when the Rainbow flag was first displayed, and how many stripes there were on the first flag.

The Rainbow flag was created by American artist and gay rights activist Gilbert Baker. It was not until 1994 that the Rainbow flag was truly established as the symbol for LGBT+ pride. That year, Baker made a mile-long version for the 25th anniversary of the Stonewall riots. Now the Rainbow flag is an international symbol for pride and can be seen flying proudly, during both the promising times and the difficult ones, all around the world. The council joins in flying this Rainbow flag.

LGBT+ stands for lesbian, gay, bisexual and transgender. The + is an inclusive symbol to mean ‘and others’ to include people of all identities.

Why is it celebrated in June?

What’s the difference between this and LGBT History Month in February?

This year, there’s a bit of an overlap, as it is 50 years since the very first Pride March in the UK. In 1972, the United Kingdom’s first Gay Pride Rally saw 2,000 people march from Trafalgar Square to Hyde Park in London.