Gypsy, Roma and Traveller History Month has been celebrated nationally in June since 2008. In Shropshire, the archives and museums team, and the gypsy and traveller family liaison officer, have been taking a closer look at the national and local history around travelling showpeople.

“The history of travelling showpeople in Shropshire shows that our county was very much on the international circuit, as we can see from the pictures held in Shropshire Archives and Museums, viewable on their website.

The famous equestrian American Richard Sands and his ‘Great American Circus’ only came over to England for the first time in 1842, and there’s a photo of them in Ludlow in April 1844, complete with his famous cream-coloured horses. Meanwhile Sangar’s Circus, another famous name in the travelling showpeople world, can be seen in Shrewsbury with horses, elephants and camels in 1906.

“I would like to invite people to take a closer look at these pictures and at the local archives and museums collection, to find out more about a grouping that are very much part of the rich and diverse history of Shropshire itself, and to be celebrated as such.” 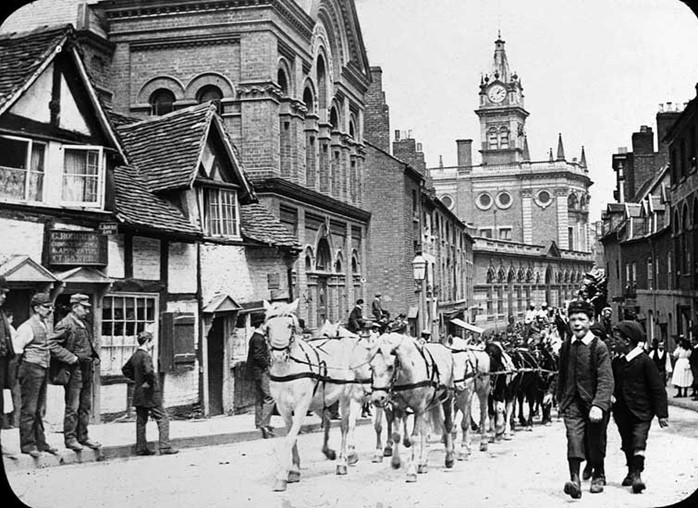 “People may not know that we have a settled family of showpeople in Oswestry. Showpeople families often intertwined at some point during their histories either through marriage or business. Every member of the family had a role in the fair from an early age, and businesses and skills were passed from generation to generation like heirlooms.

Members of the same family often presented shows in different locations at some point in their history or expanded their business from the fairground to the circus, the cinema or the theatre. The family in Oswestry have their links with show families who travelled nationally going back generations, and still continue this tradition today setting up fairgrounds throughout Shropshire.”

Travelling fairs are a British tradition, the majority tracing their ancestry back to charters and privileges granted in the medieval period. In the 13th century, the creation of such fairs by royal charter was widespread, with the Crown authorising new fairs, and bringing existing ones under its jurisdiction.

The make up of the fairground changed rapidly throughout the late 19th century, and a fairground worker might be listed in the census under any of the following terms: stallholder, amusement caterer, showman, roundabout proprietor or hawker. One thing remains unchanged, and that is the close-knit nature of the fairground community. So a show family at the turn of the century is most likely to be still associated with the fairground today.

Family history in this regard is simple – the child is born into the fair and marries within the fair. Active show families have a keen sense of family history since it is intrinsic to their very life. Marriages can often be seen as holding an importance through the business alliances that are kindled alongside the obvious personal aspects of a marriage.

There are many different people and groups who fit under the umbrella term ‘Gypsies, Roma and Travellers’ used in society. This can include Roma people, Romany Gypsies, Irish Travellers, Scottish Gypsy Travellers, New Travellers, Liveaboard Boaters and Travelling Showpeople.

Unlike Irish Travellers and Gypsies, showpeople do not view themselves as an ethnic group but a cultural one united by the fairground industry.

The first complete American circus company to cross the Atlantic, arrived under the management of Richard Sands in 1842. Sands was a versatile performer and appeared in a wide variety of equestrian acts during the tour, including an impressive Roman riding act on four horses. He was also a very capable manager and his “Great American Circus Company” introduced a number of novel features to British audiences. The most notable was simply its set up, namely a canvas tent.

Richard Sands is credited with introducing the type of tent we associate with circus today to England. Sand’s American Circus was advertised as having a “splendid and novel Pavilion, made after an entirely new style”. Sands’ Circus toured England for three or four years, and his tent was enthusiastically imitated.

Please take a look at the attached and at the further pictures in collections held by the Archives and Museums Team, and contact them via the main website www.shropshirearchives.org.uk

For further research, please also take a look at the National Fairground and Circus Archive, at the University of Sheffield, set up to try to alleviate misunderstandings the public have about showpeople. The National Fairground and Circus Archive (NFCA) was born out of the research and lifetime commitment of Professor Vanessa Toulmin, herself born into a travelling showpeople family. The Archive is part of the Special Collections and Archive Division of the University of Sheffield Library.

The fairground has seen many more famous show names over the past three hundred years. Lord George Sanger’s humble beginnings travelling a peep show with his parents underpinned a career that saw him presenting his circus to Queen Victoria. In between, the circus was clearly welcomed to Shropshire.