News from our partners: Flying the flag for the amazing May fish migration

News from our partners Unlocking The Severn

This May, for the first time in nearly 180 years, the UK’s longest river has been unlocked for the epic spawning migration of an endangered fish, the twaite shad.

An ambitious conservation project has unlocked the length of the River Severn, reconnecting ancient spawning grounds for this once-prolific fish. Four huge new fish passes now provide a route around weirs that have thwarted fish migrating upriver since Victorian times.

Shad normally visit the river in May; they were known locally as May Fish, so May Day marks the official start to the shad run. On Sunday 1 May 2022 a commemorative flag featuring May Fish designed by local children has been raised at locations along the River Severn, including overlooking the statue of Charles Darwin at Shrewsbury Library. 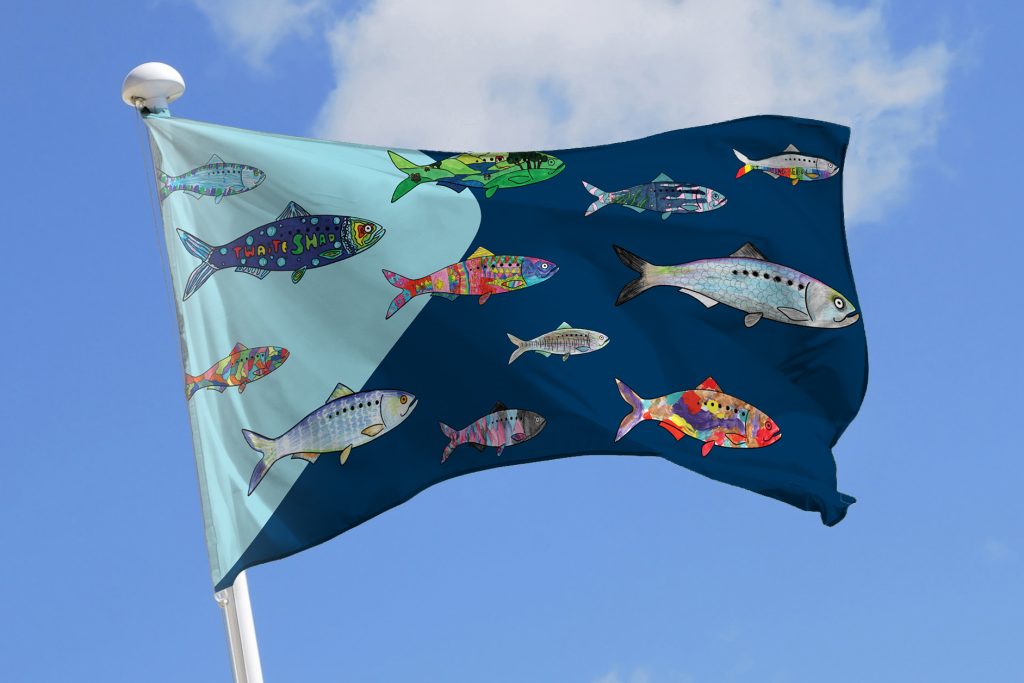 Yellow flag waving over the sky Promotional and advertisement object

The new flag brings attention to the amazing may fish migration that is largely hidden from view. The fish journey from the sea into fresh water and would then naturally travel vast distances up the river to spawn. But navigation weirs built in the mid 1840s to create more reliable passage for deeper barges carrying industrial goods blocked their path.

Earlier this year, however, the Unlocking the Severn project completed the final fish pass alongside four big weirs between Worcester and Stourport. This series of fish passes restores access to shad spawning grounds upriver and improves river connectivity for all the fish and the overall health of the river’s ecosystem.

The eye-catching flag features the winning artwork of local children inspired by the plight of this fish and the conservation project that has worked to restore the river to them. From over 1,000 entries received, the town of Shrewsbury, through which the shad will now be able to swim once again, is represented by the artwork of Maria Abou-Ammash, Year 3 and Oscar Williams, Nursery, at Greenfields Primary School, Shrewsbury.

“We were bowled over by the number of entries and the effort and creativity of the children in our design competition for the new flag. From the quality of shad illustrations, we could have created literally hundreds of fabulous flag designs, so although we could all pick a limited number for our final flag, all the children taking part should so very proud of their work.”

“I’m very pleased to have worked on this project and to see how my drawing of the shad was transformed into so many bold, colourful and intricate artworks. It was no easy task to select just a few fish from the huge number of entries as the standard was superb, but our aim was to make a selection that would work well together as a design that celebrates this beautiful fish and how important it is to the River Severn.”

The biggest conservation project of its kind in Europe, Unlocking the Severn is delivered by Canal & River Trust via partnership with Severn Rivers Trust, Environment Agency and Natural England and is made possible with funding from the National Lottery Heritage Fund and the European Union LIFE programme.

The project will be celebrating World Fish Migration Day on Saturday 21 May 2022. Local people up and down the River Severn are being encouraged to create their own May Fish Window in the run up to this celebration. To download May Fish templates, find out more about the amazing may fish migration, and for details of the open day and bookable fish pass tours, please see UnlockingTheSevern.co.uk.

Tweet
mailto:?subject=News from our partners: Flying the flag for the amazing May fish migration&body=https%3A%2F%2Fnewsroom.shropshire.gov.uk%2F2022%2F05%2Fflying-flag-amazing-may-fish-migration%2F Share via e-mail