News from our partners: Birmingham 2022 The Queen’s Baton Relay to visit Shrewsbury and Bridgnorth as full England route revealed

News from our partners

The Birmingham 2022 The Queen’s Baton Relay is confirmed to visit Shropshire during its final journey through England this summer, as the full route is revealed.

Birmingham 2022 is hosting the 16th official The Queen’s Baton Relay – a journey which brings together and celebrates communities across the Commonwealth during the build up to the Commonwealth Games. In England, The Queen’s Baton Relay will provide the opportunity for communities to experience the excitement for Birmingham 2022, as the 11 days of showstopping sport nears ever closer.

The Queen’s Baton Relay is set to travel the length and breadth of England for a total of 29 days, before culminating at the opening ceremony for Birmingham 2022 on 28 July 2022. Kicking off on Thursday 2 June, the Baton will spend four days in London, coinciding with The Queen’s Platinum Jubilee weekend. The Baton will then resume the international journey, and return to England on Monday 4 July to commence a 25-day tour of the regions.

On Monday 18 July Shrewsbury will officially welcome the Baton, followed by Bridgnorth on Saturday 23 July. 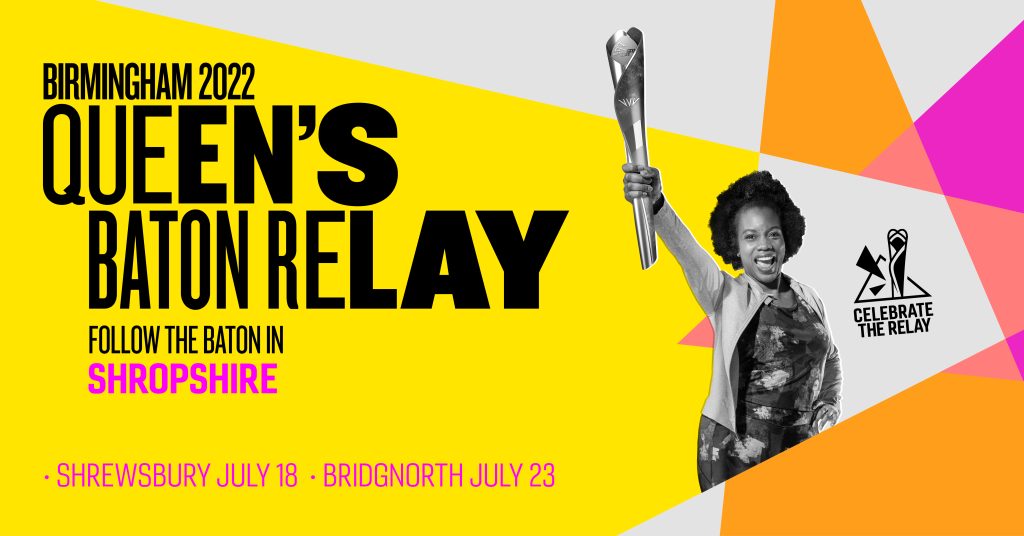 A busy schedule of activities and events are planned for The Queen’s Baton Relay, with opportunities to highlight untold stories from Batonbearers who are striving for change in their community.

During its time in Shrewsbury, The Queen’s Baton Relay will arrive by helicopter at Shrewsbury Sports Village, and will visit the Flaxmill Maltings, Shrewsbury Castle, and will experience a trip along the River Severn on its route to celebrations at The Quarry.

In Bridgnorth it will arrive on a special service of the Severn Valley Railway, pass through the town, before looping Severn Park where community sports groups will be offering taster sessions, and returning to Hightown on the Bridgnorth Cliff Railway.

The public are encouraged to get involved with the celebrations and embrace the arrival of the Baton, taking the opportunity to experience the buzz of Birmingham 2022 in their community. The Birmingham 2022 website will be updated with information over the coming months, with detail on the events and where to line the route.

“We are delighted The Queen’s Baton Relay will visit Shropshire twice on its journey through the West Midlands ahead of the Commonwealth Games.

“There is sure to be a good atmosphere in both Shrewsbury and Bridgnorth on the days, and both the Relay itself and the events we and our partners have planned will create lasting memories for the people who take part.”

Thousands of Batonbearers, each with inspiring backgrounds and stories, will have the honour of carrying the Baton during the journey through England, including those nominated in recognition of their contributions to their local community, whether that be in sport, education, the arts, culture or charity. Between 40 and 130 Batonbearers will carry the Baton each day, and the Relay will reach hundreds of villages, towns and cities during its tour of the country.

One of the confirmed community Batonbearers in Shopshire is Ron Morgan, who was nominated for his charitable work through Dreamcatcher Children.

They also support children’s charities in South Africa, India and Myanmar. In March 2015 Ron was diagnosed with stage 4 bowel cancer and was offered palliative care. After taking alternative advice and undergoing chemotherapy and operations to remove 70% of his liver following a full bowel resection, he has since undergone some 50 cycles of chemo but continues to support those less fortunate children.

He is described as “a complete inspiration”.

“We were surprised, to say the least, and humbled to have been selected to be Batonbearers. It is so kind and we are looking forward to taking part.

“Dreamcatcher Children was set up to help local children and their extended families and we just want to be able to brighten their lives as much as we can.”

Travelling via land, air and sea, more than 180 communities in England will experience The Queen’s Baton on a route spanning 2,500 miles (4,000 kilometres). From energetic cities and historic market towns, to rolling countryside and rugged coastline, the Baton will head as far south as Cornwall and as far north as Northumberland.

The Birmingham 2022 Queen’s Baton Relay began at Buckingham Palace on 7 October 2021, when The Queen placed Her Message to the Commonwealth into the Baton and passed it to four-time Paralympic gold medallist Kadeena Cox, who had the honour of being the first of thousands of Batonbearers to carry the Baton.

Since then, the Baton has visited Commonwealth nations and territories in Europe, Africa, Oceania. It still has further destinations in the Caribbean, the Americas, and more countries in Europe, including the Home Nations consisting of five days in Scotland, four in Northern Ireland and five in Wales, where it will finish on Sunday 3 July, before returning to England in summer for the final countdown to the Commonwealth Games.

The dates of when the Baton visits each region are:

“Whilst the Baton has been travelling across the Commonwealth, we have worked closely with councils in England to devise a route that engages with hundreds of communities, passing sport venues, historic sites, local schools and Areas of Outstanding Natural Beauty. Yet The Queen’s Baton Relay is far more than just a journey. It symbolises connecting people from every corner of the Commonwealth, celebrates Batonbearers who take on challenges, and marks the countdown the biggest sporting event in West Midlands history. And by the time the Baton returns to England for the final leg, 71 nations and territories will have already experienced the magic that comes with it.

“We hope that communities across the country join the excitement, attend events near them, line the streets to cheer on our incredible Batonbearers, and celebrate the Birmingham 2022 Commonwealth Games.”

“The Queen’s Baton Relay symbolises hope, solidarity and collaboration across the Commonwealth at a time when it is needed most. It continues to inspire people wherever it goes, and creates huge excitement for Birmingham 2022 as it journeys towards the Commonwealth Games Opening Ceremony on 28 July.”

Throughout May, The Queen’s Baton Relay continues its journey through the Caribbean and the Americas, with visits to St Kitts & Nevis, Antigua & Barbuda, Bermuda and Canada, amongst others.

The Queen’s Baton for Birmingham 2022 was created in a West Midlands collaboration that fused art, technology and science. Made from copper, aluminium and steel, the Baton also features a platinum strand in homage to The Queen in her Platinum Jubilee year. It is also equipped with cutting-edge technology; 360-degree camera, heart rate monitor, atmospheric sensors and LED lighting.

For more information on The Queen’s Baton Relay, visit www.birmingham2022.com/qbr.

The information provided on the route through England is subject to councils’ approval and therefore could be subject to change.

Imagery and footage from the international The Queen’s Baton Relay can be downloaded here: https://www.dropbox.com/sh/c2djp3ht3w6p0cd/AADLANtNcPkQ5_nQRoSAugG8a?dl=0

About the Birmingham 2022 The Queen’s Baton Relay

Birmingham 2022 is hosting the 16th official The Queen’s Baton Relay – a journey which brings together and celebrates communities in every corner of the Commonwealth ahead of Birmingham 2022.

The Baton has already begun its epic journey across the Commonwealth, where it will have visited Europe, Africa, Asia, Oceania, the Caribbean, and the Americas, it will return to England in July 2022 for the final countdown to the Commonwealth Games.

The Queen’s Baton will travel around England for 25 days, before the Relay officially ends at the Opening Ceremony of the Commonwealth Games on 28 July 2022. The Queen’s Baton Relay is a Games tradition that celebrates, connects and excites communities from across Commonwealth during the build up to the Games.

This collective journey will ignite hope, solidarity and collaboration for the next generation, with these stories leaving us all inspired to take on the challenges that matter most to us.

About the Birmingham 2022 Commonwealth Games

The Birmingham 2022 Commonwealth Games, which will be held from 28 July until 8 August 2022, will be a once in a lifetime opportunity to put the city, the region, and its people on the global stage.

The Games is already proving to be a catalyst for transformation across the West Midlands, attracting new investment and funding, creating jobs and apprenticeships for local people and new opportunities for local businesses, as well as accelerating projects that will ensure the region is ready to host a fantastic sports and cultural celebration.

Birmingham 2022 will be the Games for everyone, bringing people together from across Birmingham and the region, to provide a warm welcome to millions of visitors during the summer of 2022.

Find out more at www.birmingham2022.com

Tweet
mailto:?subject=News from our partners: Birmingham 2022 The Queen’s Baton Relay to visit Shrewsbury and Bridgnorth as full England route revealed&body=https%3A%2F%2Fnewsroom.shropshire.gov.uk%2F2022%2F05%2Fbirmingham-2022-queens-baton-relay%2F Share via e-mail