Plans to future-proof Shropshire Council’s first solar farm by doubling its size and increasing its output have won backing.

The initial scheme was approved by Shropshire Council in July 2021, with the intention of it being built in two stages; but following technical discussions with Scottish Power and local businesses, the solar farm, on a former landfill site in Oswestry, will consist of just one phase.

The proposals won the support of Shropshire Councillors.

A planning application must now be submitted, but if approved the farm will be able to generate 2MW of clean energy a year, and save 490 tonnes of carbon emissions a year.

It would also form an important step forward in the council’s goal to help tackle climate change, and for the council to be net carbon neutral by 2030.

It is intended the power generated would go straight to businesses close to the site, which is near Maesbury Road, helping them to reduce their carbon emissions and running costs as well as protecting their energy supplies.

Revenue generated from power created would also be used to repay the cost of the solar farm, and be invested in council services to benefit communities across Shropshire. 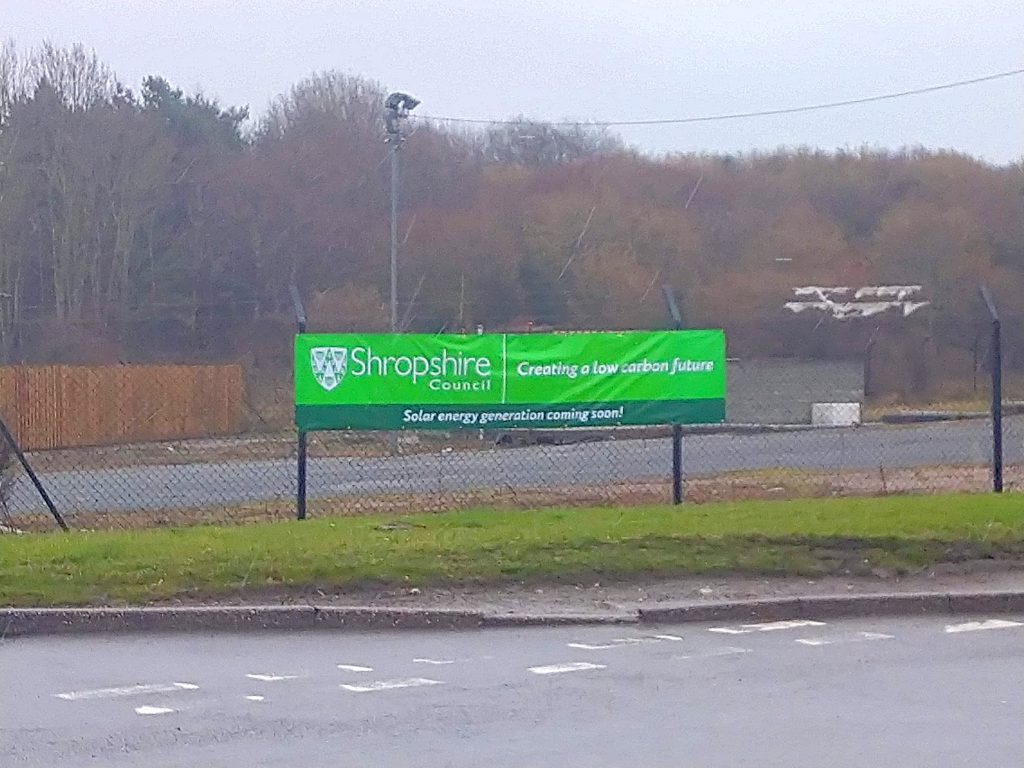 Banner at the solar farm site in Oswestry

“We’re committed to driving down our own carbon footprint and helping others to do so. With this scheme businesses near the site could source energy in a greener way, and we put a former landfill site to a really positive use. The scheme over time would pay for itself.

“We know that to hit our target of reaching net-zero carbon by 2030 investment is required, but this is far outweighed by a move away from our reliance on fossil fuels. There are also lots of other longer-term benefits, such as using the money we get back to reinvest into services for our residents and businesses.”

Tweet
mailto:?subject=Solar farm is shining light in bid for council to be carbon neutral&body=https%3A%2F%2Fnewsroom.shropshire.gov.uk%2F2022%2F01%2Fsolar-farm-council-carbon-neutral%2F Share via e-mail