The key changes to the proposed scheme would cut its carbon impact from construction by 31% (equivalent to 22,200 tonnes of carbon), and cut its current estimated cost by £7 million.

Among the key changes made to the planning application are: Many of the changes to the plans are in response to feedback received to date from consultees and the public. However, they also follow further detailed surveying of the proposed site over recent months, which would allow lower carbon construction methods than those in the initial application submitted in February 2021.

This would also need less construction traffic on and off site, with more earth moved during construction reused to build up embankments. The scheme would also see an additional 7 km of new cycleways, bridleways and footpaths added to the north of Shrewsbury.

If approved, the Shrewsbury North West Relief Road would remove local and regional east/west vehicle movements from the historic town centre and, in so doing, free up road space in Shrewsbury to encourage residents and visitors to the town out of cars, and towards alternatives such as walking and cycling.

The completed outer ring road of Shrewsbury would add critical capacity to the existing A5 bypass, which currently sees high levels of congestion and journey time delays at peak periods. It also requires through town rerouting when the A5 is closed due to incidents. The current levels of ‘rat running’ to avoid the A5 make it very difficult to free up road space for alternative transport methods.

In addition, it would reduce journey times in and around Shrewsbury, cut traffic through village ‘rat runs’ north of the town, and provide a significant boost to business across Shropshire.

“As I’m sure many of you know, the Shrewsbury North West Relief Road is currently being considered as part of a planning application process, and the proposed changes are open for everyone to comment on.

“As the single biggest infrastructure project that the council has proposed, unsurprisingly the application has received thousands of comments. These changes respond to many of these comments, as well as the detailed ground investigation work we’ve already carried out.

“We recognise the Shrewsbury North West Relief Road would generate additional carbon in construction, and we looked at many different ways we can help reduce this. These changes do so by almost a third.

“This also takes no account of the much wider benefits that could come off the back of the scheme, such as freeing up road space in Shrewsbury to encourage more cycling and walking, and encourage people out of cars.”

The changes to the planning application can be viewed in detail and commented on; please click on the Shropshire planning portal at shropshire.gov.uk/planning/applications/viewing-planning-applications , click on ‘view planning register’, and then enter the planning reference number 21/00924/EIA in the search box at the bottom of the page.

It is expected that the application will be considered and decided upon before the end of 2021. 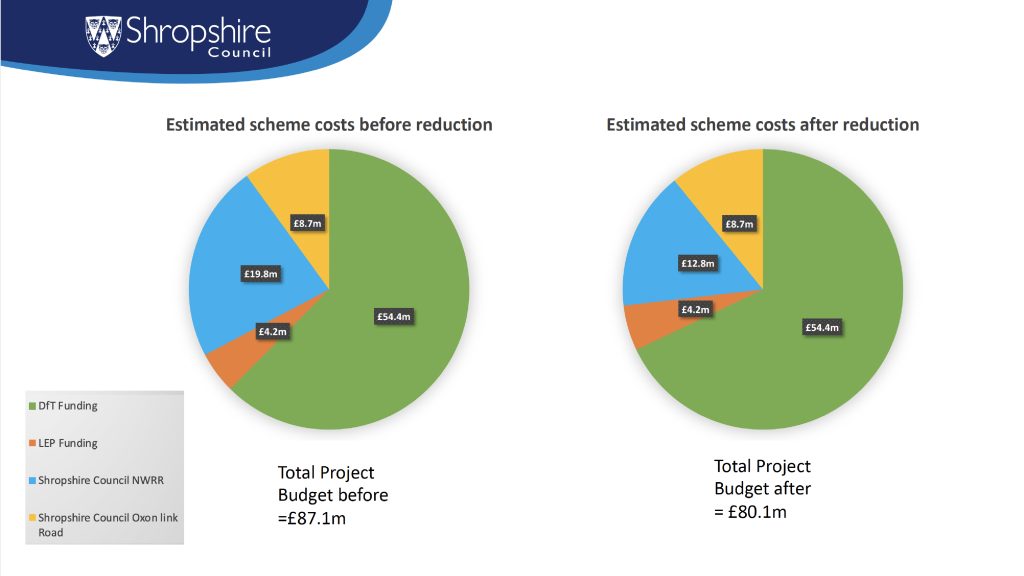 The above budget is based on Outline Business Case estimates. A further and final cost assessment will form part of the forthcoming Full Business Case, which will be considered later in 2021 or in early 2022.