Coronavirus: News from our partners – Virus continues to damage the Shropshire economy

News from our partners Shropshire Chamber of Commerce

Trading restrictions, lockdowns and growing uncertainties about the future are taking their toll on the Shropshire economy, a new survey reveals.

Shropshire Chamber of Commerce has published the results of its latest Quarterly Economic Survey, covering the final three months of 2020.

It shows that, although the overall economy saw a slight improvement on the previous quarter, Shropshire companies remain hugely concerned over cashflow – and increasingly worried about future tax rises. 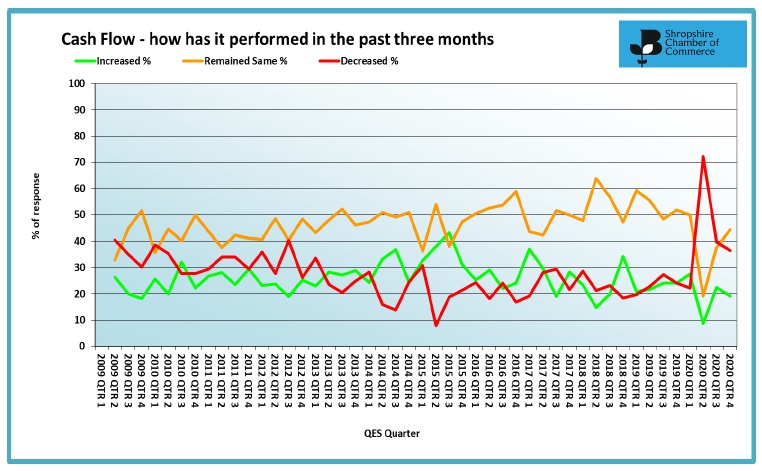 “It is simply impossible to predict the future at this time, but during this survey the news of an extension of furlough to March, and a vaccine, clearly lifted spirits.

“However, this was tempered by the second lockdown, further redundancies and a rise in COVID-19 cases across the county.”

The survey showed a recovery in both domestic and export sales across Shropshire in the fourth quarter of 2020, but the number of companies expecting UK sales to fall still exceeds those predicting a rise.

More than 60% of companies expect staffing levels to remain the same over the coming months, compared with around 15% which are warning of imminent redundancies.

Skills shortages remain a big issue in Shropshire, and the survey asked companies to identify barriers which stop people coming to work in the county.

Among the most cited issues were low average wages, bigger organisations giving work to overseas staff instead of hiring locally, and the county’s proximity to rival cities such as Birmingham and Manchester.

Bad debts have not risen, but the survey showed an increase in the number of companies being asked to renegotiate terms with suppliers – particularly the larger ones.

Investment plans for plant and machinery have stalled, but there has been an increase in those investing in training. 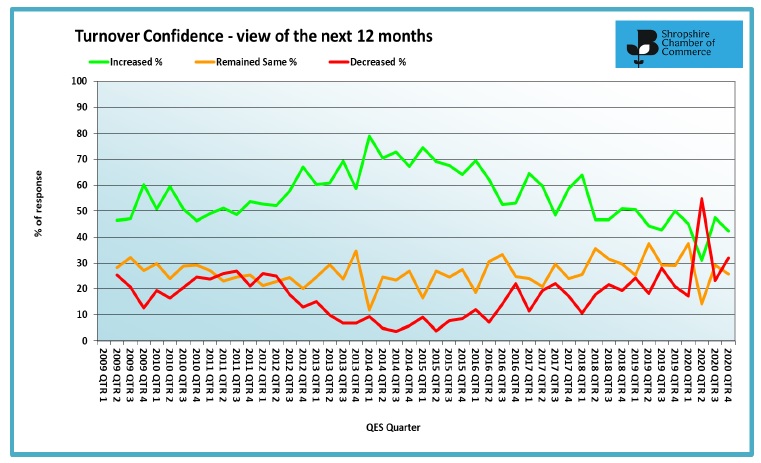 “This rise may be in part related to the investment companies have had to make to allow for home working.

“Both confidence in profitability and turnover dropped back again from the previous quarter. The second lockdown reinforced the uncertainty of the future and with Brexit making news again it has taken its toll on confidence.

“Confidence is traditionally always higher than sales reality shows. Taxation is the greatest worry by far, followed by competition – which is understandable in a shrinking marketplace.”

The survey has been capturing data about the health of the Shropshire economy as far back as 2009.

“The data which is collected is used both locally and nationally to lobby those in power on the main topics of concern.

“The national survey is highly respected and is used by the Government to understand the economic situation and pressures facing businesses in the UK.

“The greater our business voice, the more valuable the information becomes, so we want to encourage every business – Chamber member or not – to add their voice to these vital surveys.

“The survey is open to any size of business, from micros who employ no staff, to the very largest businesses.”

It covers firms employing nearly a million people – the majority being small and medium sized businesses.

It found that business conditions remained weak in the fourth quarter as the second lockdown squeezed activity, with all the key indicators still substantially worse than pre-pandemic levels.

To find out more about how to get involved in the Shropshire survey, email policy@shropshire-chamber.co.uk or call the team on 01952 208200.