John Ellery, HM Senior Coroner for Shropshire, Telford and the Wrekin, declared the ‘Wem Hoard’ as treasure at an inquest last week (Wednesday 4 September 2019, as widely reported in media).

The hoard comprises 336 items of later Roman hacksilver (including 37 coins), most of which have been deliberately broken up to be reused as bullion. The hoard is only the sixth of its kind from the British Isles and was most likely deposited at some point in the later 5th century – after the Romans had left (circa AD 410). 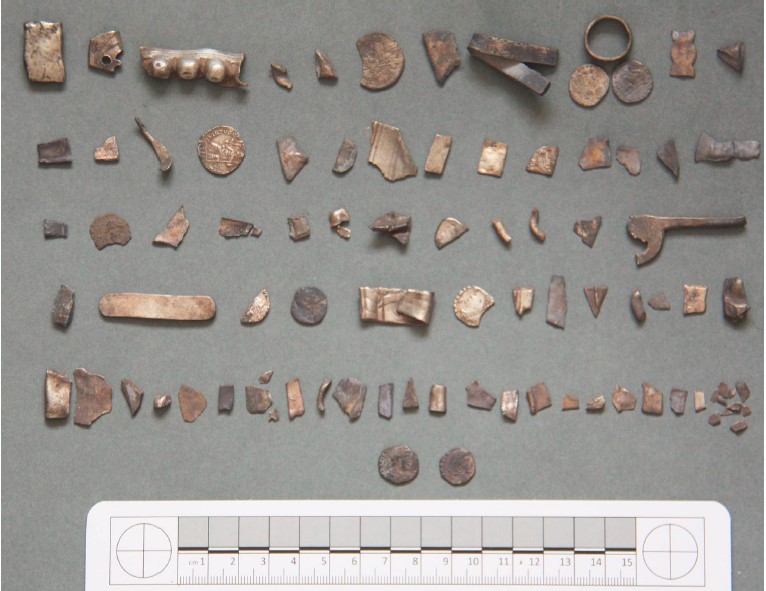 Wem Hoard: the artefacts reported as the initial hoard in 2018.
(Used with permission of British Museum’s Portable Antiquities Scheme)

The hoard was discovered on ploughed farmland near Wem by three metal detectorists in 2018. The site was revisited and excavated by Dr Roger White of the University of Birmingham recently. Through the archaeological work undertaken it was proved that the hoard was placed within an organic container in a shallow bit which was subsequently disturbed by modern ploughing.

The hoard is of key importance to Shropshire’s history where there is limited evidence of people living within the county at this time. It would have been a period of great uncertainty, resulting in the collapse of the monetary system and huge disruption to trade, so that bullion was used for the bartering of services paid for by the weight of precious metals. 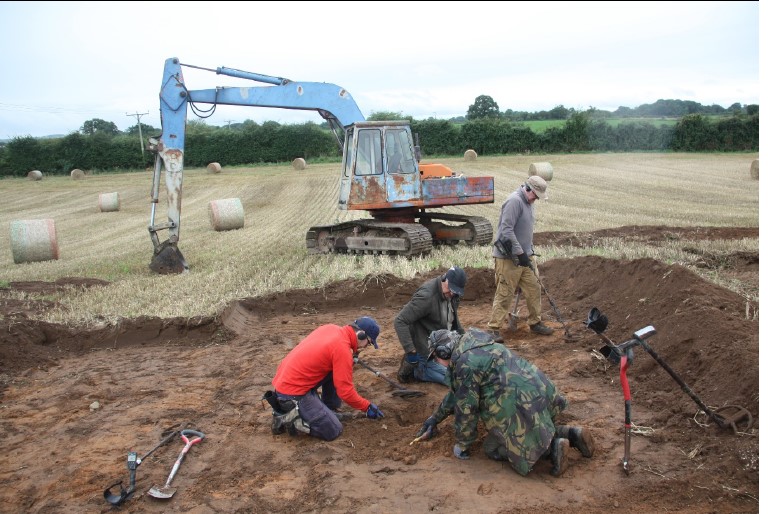 “This hoard of late 4th and 5th century artefacts and coins was most probably deposited in the Shropshire soil after the Roman forces had left in AD 402, and most probably much later in the period around AD 460. The collection of complete and deliberately cut up coins and artefacts shows that the Roman monetary system has completely ended, and it is now based on the weight of silver (or bullion). The recovery of the hoard in its entirety is a testimony to the skill and work of the metal detectorists – some as small as 5mm in size weigh 1-2 grams.

“We are indebted to Dr White and the University of Birmingham for undertaking the excavation of the findspot. Their work proves that the hoard was buried in a shallow scoop in the soil and that this was disturbed by modern ploughing. This is only the sixth hoard of its type known from Britain and it is one of the latest in date known. Although many of the coins and finds are in ”a wretched condition”, their discovery sheds light on a period where we have little information – and so is a true archaeological treasure.”

“This is a game-changer for Shropshire and, for that matter, western Britain. There is a strong chance that this is a local collection. My reason for saying so is that the complete penannular brooch found with the hoard is a British type – all the parallels are in western Britain, northern Britain or in Ireland, and those examples that have been found in the east are clearly imports.

“What does this mean for our interpretation of the area? What it tells us is that, as in eastern Britain, western Britain was using bullion to pay its defenders. What is different is that in the west, they were successful in keeping the English at bay for longer, as has already been argued at Wroxeter and elsewhere. The west is the centre of native resistance to the English.”

“The finds that make up the hoard are all clues which help archaeologists to date exactly when this change was occurring. Each object is part of that research jigsaw, with coins in turn helping to date other objects such as brooches. Adding the hoard to our collection will allow researchers to study this carefully unpick this evidence over years to come.”

“This remarkable find being declared treasure is wonderful for Shropshire, and further demonstrates the rich and broad heritage we are fortunate to hold in the county.

“I am excited that the finds will now be valued and funds will be raised by Shropshire Museums to acquire it for the people of Shropshire to be displayed at our flagship county museum, Shrewsbury Museum & Art Gallery.”

The monies raised will be paid to the finders and the landowners as a reward.