The Trust that runs Shropshire’s two acute hospitals has appointed its first Sepsis Nurse Practitioner to strengthen and implement the advancements that have already been made in its Sepsis care.

Angela Windsor, who takes on the role following her work at the Trust as a Resuscitation Officer, will  facilitate a push forward in the way The Shrewsbury and Telford Hospital NHS Trust (SaTH), which runs the Royal Shrewsbury Hospital (RSH) and the Princess Royal Hospital (PRH) in Telford, detects and treats Sepsis and will ensure that this work is sustainable. She will also focus on the screening and treatment of Sepsis patients as well as providing education and training to staff.

“I am incredibly excited to be undertaking the role of Sepsis Nurse Practitioner. I am passionate about ensuring the best possible care for our most vulnerable patients and I am also privileged to work with so many staff who share my passion and are equally dedicated.

“I believe that we can bring about demonstrable improvements in the quality of care for patients with Sepsis and improve patient outcomes by making small changes.

“There is excellent work that has already begun within the Trust and in departments to further enhance Sepsis care provision and I hope to be able to work alongside all of the teams to build on this and ensure that these improvements are sustained and stand the test of time.”

Sepsis is a serious complication of an infection. It is sometimes referred to as blood poisoning, but this is in fact an effect of Sepsis.

Normally our immune system fights infection – but sometimes, for reasons we don’t yet fully understand, it attacks our body’s own organs and tissues and can lead to organ failure and death. 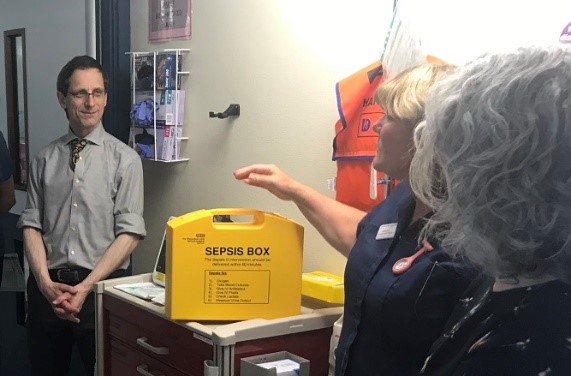 Mandie Esp, Ward Manager 25, tells Executive Director, Dr Edwin Borman, about the improvements her team have made to the way they recognise and treat Sepsis.

Across SaTH, Sepsis is detected and treated in a number of ways. Its admission areas are equipped with Sepsis trolleys which allow clinicians to immediately deliver the necessary care for a patient with suspected Sepsis. Sepsis boxes have been introduced in other areas of the hospital that can quickly be grabbed, and plans are being finalised to roll out a Sepsis PGD (Patient Group Directive), which will allow senior nurses to quickly initiate the drugs and fluids required to treat sepsis within a one hour time frame.

SaTH also has a growing team of Sepsis Champions from wards and departments at PRH and RSH who meet on a monthly basis to learn about the ongoing improvements around Sepsis and share this learning with their teams.