News from our partners: Town sets the scene for 20th DarwIN Shrewsbury Festival

News from our partners

Organisers are gearing up to mark the 20th anniversary of the DarwIN Shrewsbury Festival – an annual event during the month of February to celebrate the life, work and legacy of the town’s most famous son.

Many of the festival’s events are planned for the week leading up Charles Darwin’s birthday on Sunday 12 February 2023, although there are also a number of events to look forward to before and after the main nine-day celebration.

This year’s programme features lectures, talks, exhibitions and guided tours, including the rare opportunity to visit Darwin’s childhood garden – and the ‘thinking path’ walked by the young Charles Darwin every morning, which played a major role in the formation of his thoughts on evolution.

There will be the annual birthday toast at the Bellstone which people are invited to join, the Darwin Memorial Lecture and guided tours of Darwin’s birthplace – The Mount (known now as Darwin House) organised by John Hughes, Shropshire Council’s Darwin House Museum project manager.

“Preparations have gone well and we are now eagerly anticipating the DarwIN Shrewsbury Festival’s 20th anniversary. It promises to be a truly memorable occasion with more than 30 individual quality events taking place.

“I would like to thank all those who have been instrumental in organising the event for their support, the various venues around Shrewsbury who will be hosting events, and everyone else who has played a part in ensuring the festival can go ahead.

“The past year has been hugely important for us with the ongoing refurbishment of Darwin House, and it will be wonderful to welcome people here for a number of events during the festival.

“This year’s festival actually gets underway with the launch of an exhibition which runs from Saturday 14 January 14 to Sunday 26 March 2023 and is entitled ‘Charles Darwin in Shrewsbury – the Making of a Marvellous Mind’.

“It’s an exhibition which will accompany the launch of local author Jon King’s book of the same name, focusing on Darwin’s childhood and upbringing in Shrewsbury.

“The book signing launch takes place at Shrewsbury Museum and Art Gallery on Wednesday 18 January, and it will be Jon who will make his now traditional toast to Darwin on the great man’s birthday on 12 February.” 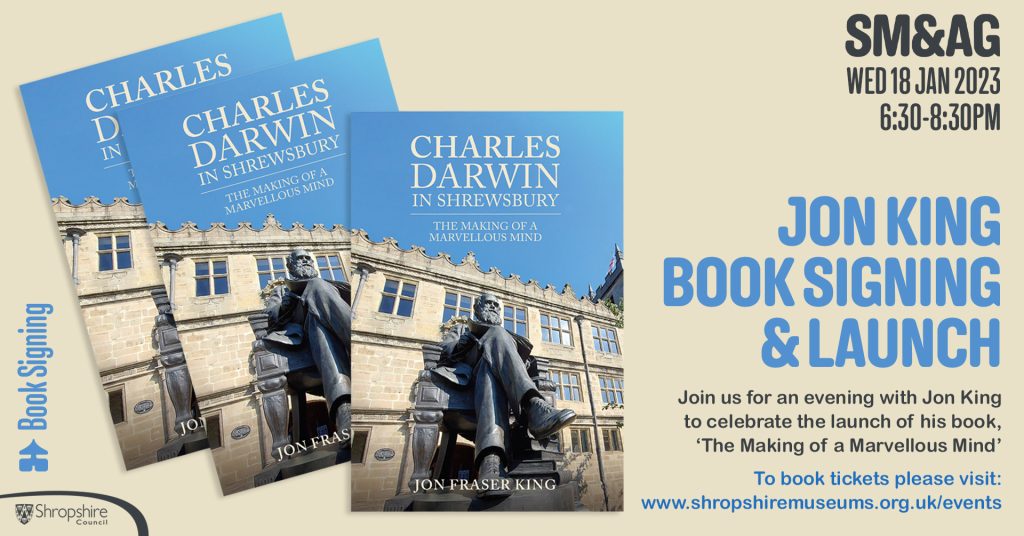 Other festival highlights include: A tour of Charles Darwin’s Shrewsbury on Saturday 4 February and, the following day, an afternoon focused on Charles Darwin’s Family – Vaughan Williams: The Man and His Music.

The event will take place in the original family dining room in Darwin House and will feature a talk about the life and music of the composer who was a great nephew of Darwin. The talk, presented by Ted Maidment, will be accompanied by John Moore on piano and Alex Postlethwaite on violin.

Monday 6 February will see Shropshire Chamber of Commerce relaunch its 1835 Group supported by University Centre Shrewsbury – an event aimed at shaping the future of the Shropshire business landscape.

The annual Darwin Memorial Lecture is on Sunday 12 February 2023 when Dr Jude Piesse, a lecturer in English literature at Liverpool’s John Moores University, will examine Darwin’s family garden at The Mount and its impact on Darwin’s life, and work – experiences which were the catalyst for his world-changing discoveries.

A full programme of over 30 events throughout February 2023 can be found at: https://darwin.originalshrewsbury.co.uk/