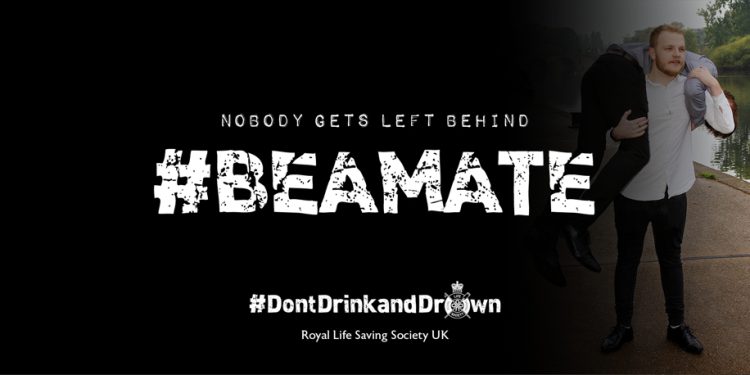 The Royal Life Saving Society UK’s (RLSS UK) annual week-long Don’t Drink and Drown campaign launches on 12 September [2022], aiming to get the message across about water safety as thousands of students head off to start their first year at university.

In a sample of UK accidental drowning cases analysed in detail by RLSS UK, at least half of those aged 16-25 who lost their lives were students.  As a result, the charity is urging students to familiarise themselves with their new surroundings, especially if there is a body of water within the town or city they are moving to.

Three in four of these accidental drowning victims were alone. The campaign aims to speak to students and encourage them to, after a night out, be responsible for their friends, be a mate, and ensure they return home safely.

As freshers’ events take place across the UK in September, many students will be heading to bars and clubs to celebrate the start of their university adventure, and this is where RLSS UK fears tragedies may occur.

“We have seen tragic stories in the past where students have been excited for a new adventure in a new city and should have been enjoying their first few weeks at university but sadly their night did not end how it should have.

“45% of accidental drownings among 16-25 year olds in the last five years cited alcohol and/or drugs; we know that alcohol and drugs have a number of different effects on the body including lowering inhibitions, which leads to impaired judgment, and this is where we see people taking risks and getting themselves into trouble in, on and around water.”

In line with this, the data also reveals that when under the influence of alcohol or drugs, accidental drowning victims are much more likely to have unintentionally fallen into the water; 55% compared to 36% for those who were not under the influence.

“We are encouraging students to get to know their new surroundings and if they have a river, canal or other body of water in the city or town that they have moved to, then ensure that the route home after a night out is one which steers clear of the water.”

Further analysis among this group highlighted that, where known, over half of drug and alcohol-related drownings take place between 11pm and 5am the time in which students may be walking home from nights out. RLSS UK wants to reinforce the message of safety in numbers, be a mate, and stick together to make sure everyone makes it home safe.

“Unfortunately in recent years we have seen cases of young people walking home after a night of drinking, and for various reasons getting too close to the edge and ending up in the water. At this time of year, the water is colder than it looks and cold water shock is a significant factor, and paired with alcohol numbing senses, limiting muscle ability and slowing down reactions, it makes it extremely difficult to be able to swim and self-rescue. As we see, mainly young men, walking home alone, sadly in these cases there is nobody around to help we see nights out turn into tragedies.”

For more information about the Don’t Drink and Drown campaign, click here.