A film revealing the fascinating history of the ever-changing face of Shrewsbury’s Raven Meadows has been created by the team at Shropshire Council’s Museums and Archives service.

No part of the town centre has seen such change as the area between the rear of the main shopping streets and the banks of the River Severn, and original archive material held by Shropshire Museums & Archives chronicles those changes in the film called Shrewsbury’s Fields of Dreams.

Local historian Phil Scoggins has used the information to research and narrate the film, which has been created by Shropshire Council reprographics officer Nat Stevenson with the assistance of Mike Wilde, a technician at the council-owned Theatre Severn. 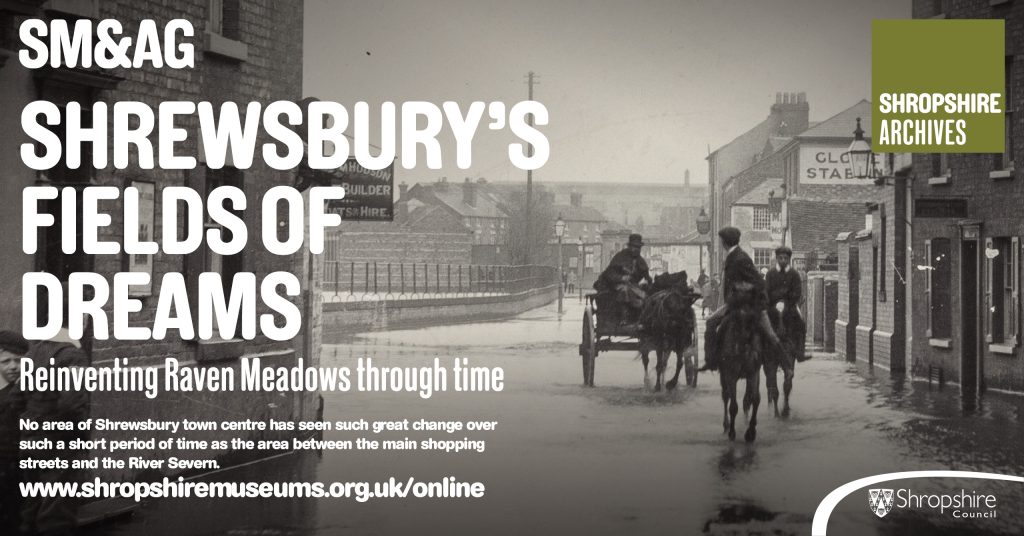 The 40-minute video takes viewers around the perimeter of Raven Meadows down Meadow Place, along Smithfield Road, up Roushill and along the backs of Pride Hill and Castle Street, before plunging into the ever-changing area in the middle.  It highlights the homes of medieval merchants, Roushill’s colourful past, and the lofty but doomed ambitions of 1960s architects.

“This video shows how Raven Meadows has changed and adapted over many years to meet the differing needs of the town and its population.

“It is of great value that Shropshire Museums & Archives service has the evidence and documentation to illustrate the changes, and with Phil’s informed narrative take us on such an interesting journey through time.”

“This fascinating film uses a carefully researched selection of images and archive footage to help us to understand changes and developments over time.

“As Raven Meadows is about to undergo another exciting transformation, we hope the interesting stories the film reveals will help to shape the future of this important part of Shrewsbury.”

A previous collaboration looked at Shrewsbury’s West End and the changing face of Barker Street, Bridge Street and Hill’s Lane.

Both videos can be seen on the SM&AG website online resources section.