Plans to implement a pilot 20mph speed limit in the Copthorne and Porthill areas of Shrewsbury will be considered by Shropshire Council’s Cabinet at its meeting on 8 June.

Councillors will be asked to agree that the proposals go out to consultation, with a view to introducing the 20mph zone for an initial period of up to two years, if there is public support.

A 20mph speed limit zone for Copthorne and Porthill was put forward as part of the proposed Liveable Neighbourhood Trials engagement exercise undertaken in the areas in late 2021. It received the most support (up to 85%) out of all the proposed measures the community were asked to provide feedback on.

If approved it would be implemented via a phased approach with the initial introduction of low-cost measures including signage and road markings and a community behaviour change campaign to encourage drivers over time to drive at an appropriate speed without excessive reliance by the council on enforcement by the police.

“The core aim of implementing a 20mph speed limit zone in Copthorne and Porthill would be to improve air quality, reduce overall traffic speeds in the area closer to 20mph, and to make the built environment safer and a more attractive place to walk and cycle.

“20mph speed limit zones are relatively widespread with more than 2,000 schemes in operation in England. There is overwhelming evidence that lower speeds result in fewer collisions and a reduced severity of injuries.”

It is envisaged that speeds across the area would be monitored as part of the pilot and would be used to inform whether further engineering measures are required to reduce vehicular speeds at problem sites.

The Cabinet report can be seen here.

1) The proposed 20mph speed limit zone for Copthorne and Porthill would cover the area within (and inclusive of) The Mount (A458) – from 55 metres west of its junction with Hafren Road), the whole length of Porthill Road (A488) and (but not including) Shelton Road (See map below). New St (A488) had a 20mph speed limit      order approved in April 2022. 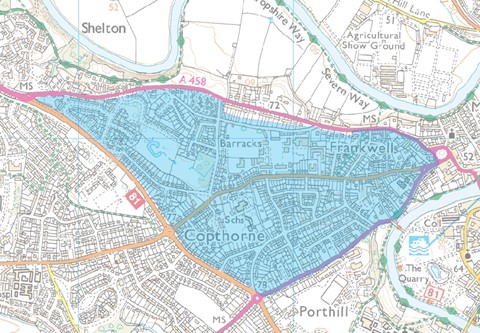 2) Prior to the May 2021 local council elections, Scrutiny committee undertook significant work on 20mph speed limits and speed limit area zones and concluded that 20mph restrictions should only be considered in the following locations:

For the most part, a 20mph speed limit zone for the Copthorne and Porthill area meets the requirement outlined in the second bullet-point above.

Tweet
mailto:?subject=20mph limit in Shrewsbury’s Copthorne and Porthill areas to be considered by Cabinet&body=https%3A%2F%2Fnewsroom.shropshire.gov.uk%2F2022%2F05%2F20mph-copthorne-and-porthill-to-be-considered%2F Share via e-mail