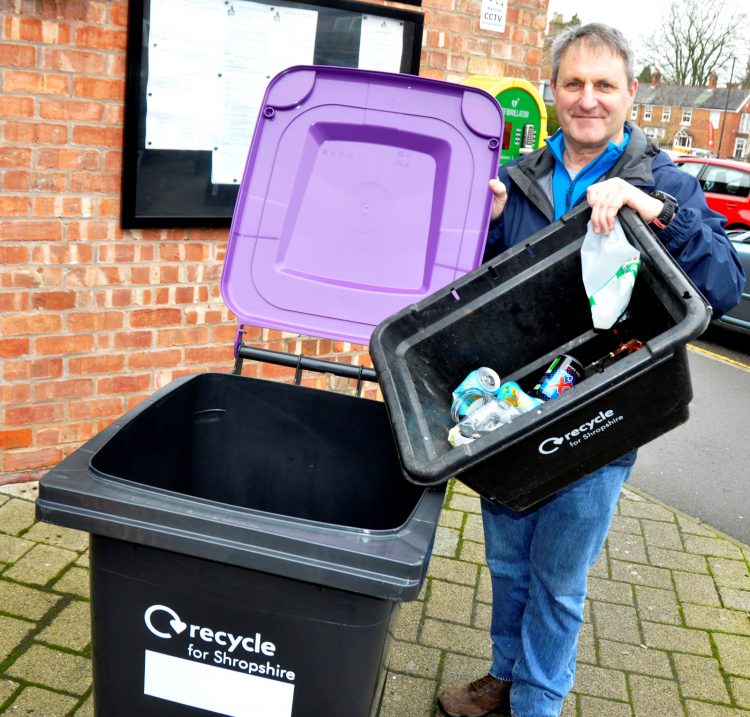 Councillor Ian Nellins with one of the new bins

Shropshire householders can now request an additional wheelie bin for recycling cans, glass and plastic at the kerbside after councillors approved an investment of almost £3m to fund the extra bin.

The plans were agreed by Shropshire Council’s Cabinet in July 2021, but the funding had to be approved at a meeting of the full Council today [Thursday 13 January 2022].

To request a bin people should go to shropshire.gov.uk/requestmixedrecyclingbin to place an order online.

The first bins are set to be delivered from May this year, starting in the south Shropshire area, with deliveries then being made in other parts of the county.

The bin – which is optional and free – will replace the existing black recycling boxes, and help to increase the amount of waste recycled  by providing households with a larger container.

It will also reduce the amount of waste lost to the recycling process after being blown out of the boxes on windy days,

It will make the storage of recycling more convenient for residents, and reduce the amount of bending and lifting for residents and waste and recycling crews.

“I’m delighted that Council has agreed to fund the rollout of the additional bin and that people are now able to order theirs.

“The provision of a bin for recycling is a direct response to residents’ comments and requests – and is a pledge we made in our election manifesto last year.

Some households may not want a bin due to housing layout or the lack of storage space for the bin. These residents would be able to continue to use their existing waste containers, as will those residents who simply prefer to use boxes.

People will also be able to use their new bin as well as their recycling boxes.

The bin will be 240 litres, the same as those in standard use for general waste and garden waste. It will be a different colour, to differentiate it from the other bins in use.

Residents will be encouraged to retain and reuse the existing collection boxes for different purposes.

A customer satisfaction survey for the waste service conducted in 2018 included the question “What would make it easier to recycle at home?”. 45% of the responses stated that this would be achieved by the use of a wheeled bin for recycling.

Further to this local interest, the latest Government recycling tables for English councils show that all of the top five performing councils (Three Rivers, Vale of White Horse, South Oxfordshire, East Riding of Yorkshire, and St Albans) use a bin for collecting dry recycling.

In 2020/21 Veolia collected 17,000 tonnes of plastics, glass, and metals from the kerbside in the Shropshire Council area.