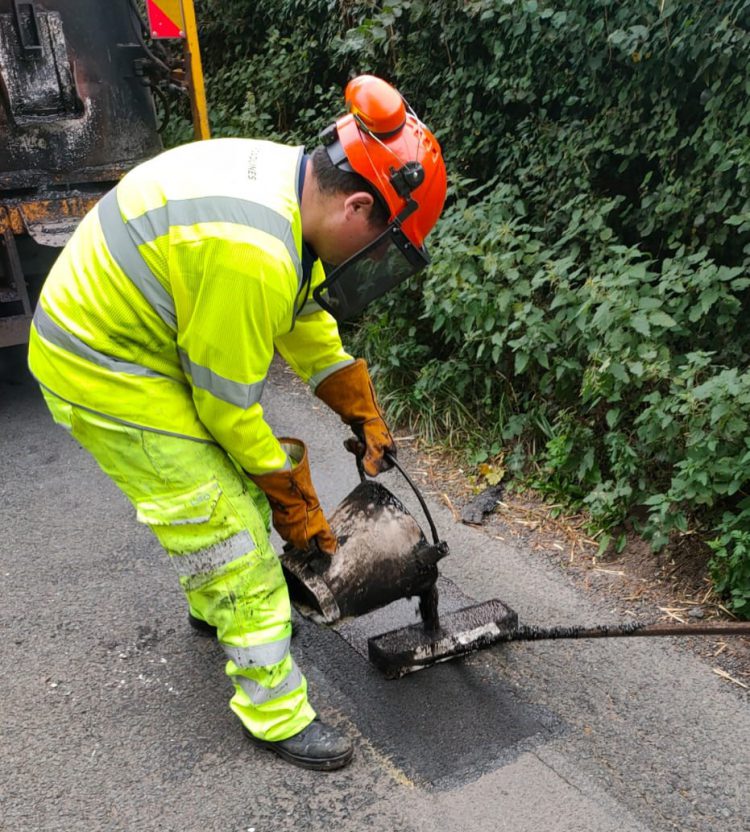 An innovative new way of repairing Shropshire’s potholes more quickly, quietly and effectively is being used to tackle potholes in Shropshire’s towns and villages.

Since 21 June [2021] more than 2,600 potholes and other defects covering a total of 9500m2 have been treated in towns across the county including Oswestry, Whitchurch, Broseley, Ludlow, Shifnal and Cleobury Mortimer (see notes).

Under the new process, potholes on urban roads are cleaned out, filled with a unique material called Texpatch, then covered with a neat, square patch. This provides a longer-lasting, smoother, neater finish compared to traditional pothole repairs, and seals up all joints, which should result in an increased life span for the repair.

Its focus is to repair a large number of potholes, with up to 40 being be repaired each day – compared to 20 per week using more traditional methods.

The work is being carried out by Shropshire Council and its partners in the Shropshire Highways alliance, Kier and WSP, and L&R Roadlines.

“I’ve said many times that we’re working hard to improve Shropshire’s roads and make them safer for all road users, and here’s evidence of that. We’re out there every day, right across the county, treating potholes and other defects on roads.

“Using Texpatching we’re repairing the roads in our towns and villages, with hundreds of potholes treated in the past two months, and many more to be tackled in the weeks ahead. Using this process for treating urban potholes also frees up crews to tackle potholes in rural areas using our four Roadmaster vehicles, the new Mulithog road planer and more traditional repairs by gangs.

“There are still are a lot of potholes and other defects in need of attention right across Shropshire, but we’re working hard to improve the county’s roads and we’re making really good progress.”

The work is also much quieter than traditional repairs and can be carried out at night, as it doesn’t require the use of mechanical tools – other than the air hose which will be used to clean out debris from the defect. And night working allows more work to be carried out as there aren’t the same traffic restrictions.

Likewise, the process is so quick it’s classed as mobile works and therefore traffic management isn’t be needed for the vast majority of the repairs, reducing disruption and inconvenience to road users while work is carried out.

1) Towns that have been worked in so far…

3) The traditional ‘cut out and fill’ method of repairing potholes doesn’t lend itself to night working due to the need for Stihl chain saws, jack hammers and Wacker plates. It also generates large amounts of waste that needs to be disposed of.

4) The work is aimed at reducing safety defects, but in the future could also target minor defects not usually rectified under Shropshire Council’s highway safety inspection manual. This will help in preventing future potholes appearing as part of a proactive treatment.