News from our partners British Museum

Ambitious in scope, this partnership will create the UK’s first pre-Roman British Museum Partnership Gallery, with fantastic highlights dating from the period in Bronze Age Britain between 4,500 and 2,600 years ago.

By immersing visitors in the rich and varied deep history of the wetlands of Shropshire Marches, the new Partnership Gallery will follow the British Museum Spotlight Loan “Gathering light: a Bronze Age golden sun”, which will be on display at Shrewsbury Museum & Art Gallery from tomorrow (Friday 10 September 2021) to 12 December 2021. Both the Spotlight Loan and Partnership Gallery are initiatives as part of the British Museum’s National Programmes to work with partners and share its collection with the widest possible audience around the UK. 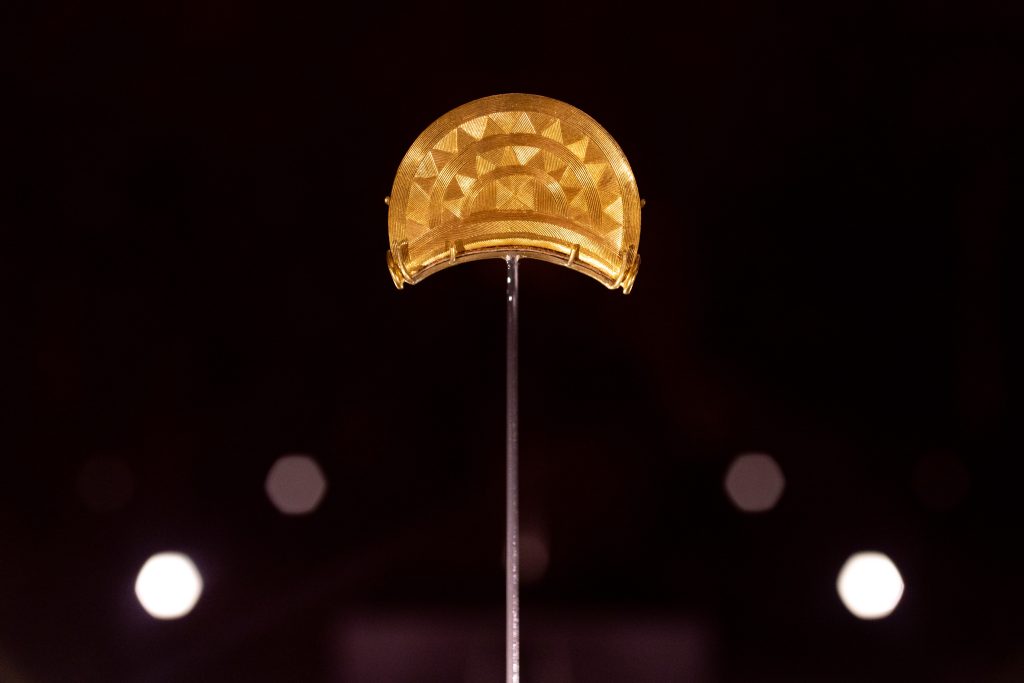 Picture by Shaun Fellows / Shine Pix Ltd. An extraordinary
sun pendant is to go on public
display for the first time
as part of the British
Museum’s National Programmes. The sun pendant,
also known as a bulla, could be one of the
most
significant pieces of Bronze Age metalwork ever
discovered in Britain
. The rare and spectacular
object will be hosted at Shrewsbury Museum & Art
Gallery later this year from September until
December as a British Museum Spotlight Loan.
Discovered in the Shropshire Marches in May 2018
by an anonymous metal detector user, nothing like the sun pendant has been found in this
country for over a century.

The Partnership Gallery, planned to open in 2024, will focus on redeveloping Shrewsbury Museum’s Bronze Age displays to present a dedicated and dynamic narrative of local life from the Ice Age to the Romans. It will utilise long-term loans from the British Museum, as well as displaying more of SM&AG’s collection through a redistribution of gallery space in the museum’s stunning Victorian Music Hall.

Key objects will include three superbly well-preserved woolly mammoth skeletons, which made headlines when discovered in a gravel pit near Condover, Shropshire in 1986. Dating from the end of the last Ice Age, these remains including an adult and three juveniles, are 12,800 years old. They are the most complete mammoth bones known from northwest Europe and changed opinions about when mammoths became extinct in this region.

Redevelopment will allow the display of more of Shrewsbury Museum’s nationally significant geology and archaeology collections, much of which is currently in storage. The collection comprises over 1,000 prehistoric objects, including important finds such as the 10,000-year-old barbed spear point from Porth-Y-Waen, Oswestry. The spear point is made from antler by hunters who pre-date the first farmers in the region.

High status Iron Age items such as the intricate Telford Torc (WMID-C53CB8) and the Claverley Stater Hoard (WAW-D64063), an assortment of North Eastern and Western gold coins rarely found together and dating to about 2,000 years ago will be displayed, as well as copper, bronze and gold tools, weapons and ornaments from as far back as 4,500 years ago. Mysterious spoons dating from the Iron Age (HESH-9A4B83) and found in Nesscliffe will all form part of the Gallery. Only 23 other known examples survive from the Iron Age.

The spoons appear unsuitable for eating with stubby handles and shallow bowls, suggesting the possibility of occult practices such as divination. These archaeological finds recorded by the British Museum’s Portable Antiquities Scheme (PAS) throughout Shropshire reveal evidence of the way of life and possible ideas about afterlife.

This partnership recognises the internationally significant historic landscape of Shropshire, highlighting its growing research potential and showing communities from 8,000 years ago in the Shropshire landscape were well connected across Britain, Ireland and western Europe.

The Gallery will mark the innovations of farming and metal working brought in by migrants from this time to the Roman period. The quality of the collections reflects the diverse geology of Shropshire and signals its national importance. The remarkable objects in the new gallery will introduce the Shropshire landscape as an important location for ceremonial activity over 3,000 years ago, with precious objects likely deposited into water as religious offerings. 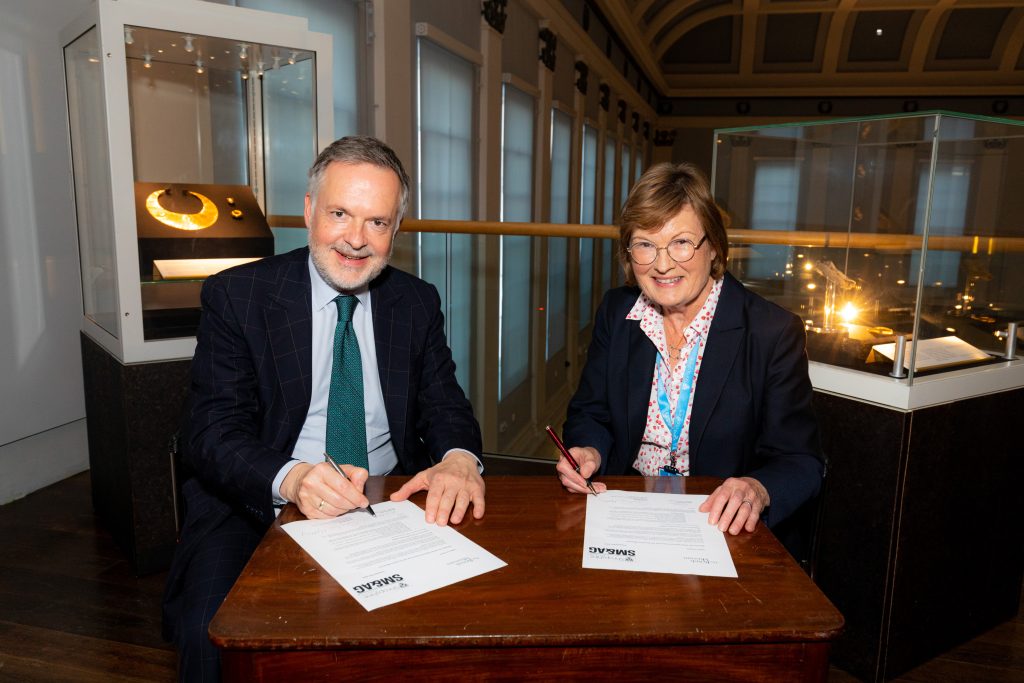 “The Shropshire sun pendant is truly an incredible find and one of huge importance. We are delighted that this 3,000-year-old object will go on show to the public for the first time at Shrewsbury Museum & Art Gallery and that it has sparked the Partnership Gallery intentions with the British Museum. We are delighted to be working in partnership and I look forward to what I’m sure will be a very popular attraction.”

“As part of the partnership, British Museum experts will provide curatorial advice on the redisplay, with skills-sharing and learning opportunities for both organisations. Shrewsbury Museum & Art Gallery will also have access to the Museum’s extensive collection of Bronze Age objects for long-term loans to complement the incredible objects on display.”

“It is fantastic to have the opportunity to work with colleagues at Shrewsbury Museum & Art Gallery to create an innovative new gallery dedicated to the pre-Roman past of the Shropshire region. Being able to work with Shrewsbury and British Museum collections, data from the Portable Antiquities Scheme (PAS) and forensic evidence from recent excavations, it will be possible to explore the changing landscape, ecology and inhabitants over a period of some 10,000 years.

“Starting from the end of the last Ice Age when woolly mammoths still roamed, this era encompassed big changes, including the introduction of farming about 8,000 years ago to the magic of metalworking 4,500 years ago. The Partnership Gallery will use Shropshire as the theatre in which the artefacts of human, cultural and ecological dramas will take the stage to show the rich and lively history of a region that flourished through its own natural resources and connections with Ireland, Britain and continental Europe.”

“Establishing a partnership with the British Museum represents a significant moment, not only for Shropshire Museums but for the county of Shropshire. We are delighted to have the opportunity to work with the team at the British Museum and look forward to the development of an inspirational and inclusive display which deepens our collective understanding of this fascinating period of history. We are grateful for the support of the British Museum Trust and Arts Council England as we begin the first phase of our partnership.”

Ongoing research funded by the British Museum with fieldwork in Shropshire hopes to shed light on the period when our ancestors first began to use metal. Carried out in collaboration with Shrewsbury Museum, Trent-Peak Archaeology and University College Cork, this research has the potential to highlight the religious and cultural importance of watery locales during this period, which will help inform the development of the Partnership Gallery.

The Partnership Gallery will highlight how the elements of water, sun, and sky were key to the cosmological beliefs of societies at this time from communities in Britain, Ireland and north-west Europe. Ultimately, the Partnership Gallery will present fascinating objects in the context of the dynamic historical landscape of Shropshire, exploring the ways in which past communities experienced and changed the natural world.

British Museum Spotlight Loan “Gathering light: a Bronze Age golden sun” will be on display at Shrewsbury Museum from 10 September – 12 December 2021. The Partnership Gallery is scheduled for 2024.

Shrewsbury Museum is Shropshire’s flagship museum and it is hoped this partnership will help transform the cultural offer within Shropshire for local and national audiences over the next five years. The Partnership Gallery will tie into the national curriculum and give access to ancient material to enhance understanding and study.

Through this partnership, the next generation of local children and young people will be inspired by our shared history. Other Partnership Galleries across the country cover topics as broad as medieval Norfolk, Ancient Egypt, Rome and faith in Cornwall, Birmingham, Carlisle, York and Glasgow with more planned in Manchester and Norwich.

About the British Museum’s national programmes

The British Museum has a presence throughout the UK by reaching into homes and schools virtually, and by lending hundreds of objects to partner organisations each year. Everyone has the chance to engage with the British Museum’s collection and expertise.

With the lead support of the Dorset Foundation in memory of Harry M Weinrebe, in 2020/21 the British Museum lent 1,453 objects to 77 venues, reaching half a million visitors outside London. Even with pandemic related closures, three times more visitors saw a British Museum object outside of London than in Bloomsbury in 2020/21.

The British Museum is committed to sharing its collection and knowledge as widely as possible and create positive educational, social and economic impact for people and places across the UK. Facilitating new perspectives on our shared global history with others through Partnership Galleries, these exhibitions reflect diverse viewpoints, lived experiences and collective ideas. The Museum also manages the Portable Antiquities Scheme (PAS) in England, recording and sharing British archeological discoveries to help shape our understanding of the past.

In the 1830s, groups of enquiring minds across Shropshire came together to create museums to preserve and celebrate the stories that make the county unique. Early supporters included Charles Darwin and William Penny Brookes.  These early museums were a focus for research and for sharing new ideas and knowledge with a wider public. They are the foundations of the exceptional collections we care for today. Over the years, objects have been donated by members of the community, eager to share their piece of Shropshire’s past. Our collection highlights include:

Thousands of archaeological objects are discovered every year, many by members of the public, particularly by people while metal-detecting. If recorded, these finds have great potential to transform archaeological knowledge, helping archaeologists understand when, where and how people lived in the past. PAS (www.finds.org.uk) offers the only proactive mechanism for recording such finds, which are made publicly available on its online database.

Many organisations have also supported the acquisition of Treasure finds, including Art Fund, the Headley Trust, the Heritage Lottery Fund, the National Heritage Memorial Fund and the V&A Purchase Grant Fund. Without these, as well as public donations, many important archaeological finds would not be in public collections.

Art Fund is the national fundraising charity for art and helped the British Museum to acquire the sun pendant. www.artfund.org

For more, follow the British Museum blog at blog.britishmuseum.org

Images for media can be found here:

Gallery and objects to be displayed https://bit.ly/3l6URpB