News from our partners: Spades in the ground to deliver new dedicated veterans centre at RJAH

The £6 million pioneering facility is being built onsite at The Robert Jones and Agnes Hunt Orthopaedic Hospital NHS Foundation Trust (RJAH), a world-renowned organisation based near Oswestry.

The hospital had initially launched a £1.5 million appeal back in October 2018 to build a more modest outpatient facility for veterans, but is now set to boast a vaster facility, thanks to the support of the Headley Court Charity.

Headley Court was the leading medical rehabilitation base for members of the Armed Forces before the transfer of those services to a new facility at Stanford Hall.

Following that move, Trustees of the Headley Court Charity, had been looking for worthy causes in keeping with their ethos and aims to support in the form of charitable grants from their reserves.

They identified the Veterans Orthopaedic Centre at RJAH, which aims to treat service personnel and veteran patients in a bespoke, military environment, which feels familiar to them, while addressing their specific needs. Having agreed to the multi-million pound grant, the new facility will be known as the Headley Court Veterans’ Orthopaedic Centre.

Lieutenant Colonel Carl Meyer, a serving Army Officer who is also a Consultant Orthopaedic Surgeon at RJAH, and hospital leaders, Frank Collins, RJAH Chairman; and Mark Brandreth, RJAH Chief Executive, were joined by a small number of local dignitaries and supporters of the project to mark this momentous occasion. 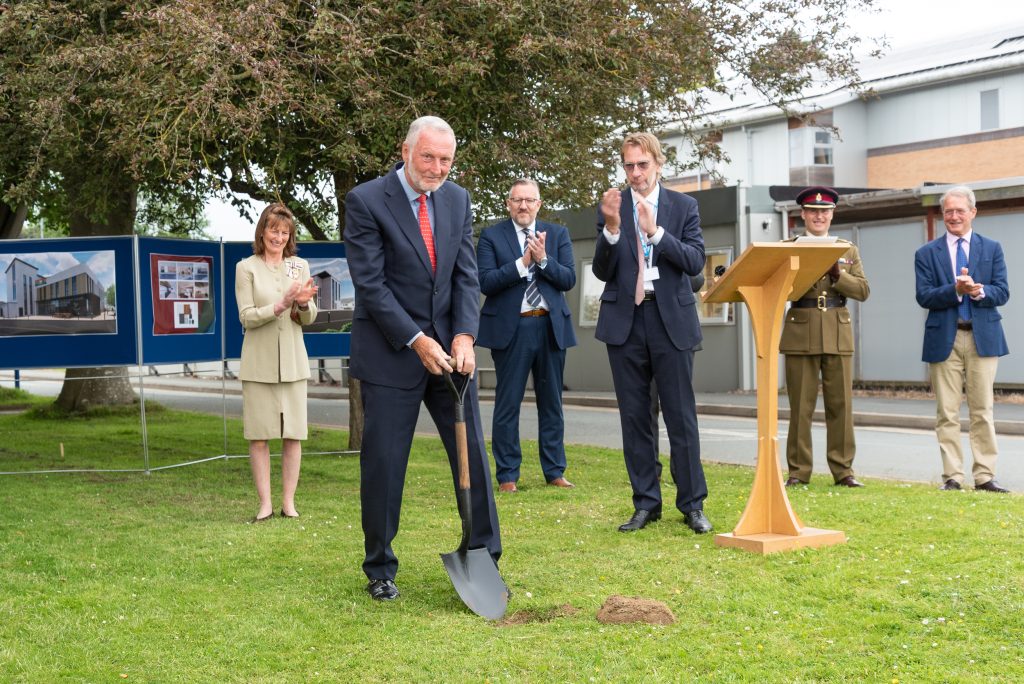 To symbolise the exciting beginning of a new era for veteran healthcare provision, as spades hit the ground, Stan Wilkinson and Don Somers from the Buglers Association of the Light Division and the Rifles sounded ceremonial fanfare, while a flag depicting the Veterans’ Orthopaedic Service logo, developed and designed by the Medical Illustration team, based at RJAH, was raised for the first time.

The Veterans’ Orthopaedic Service at RJAH was initially started in 2014 by Lt Col Meyer. 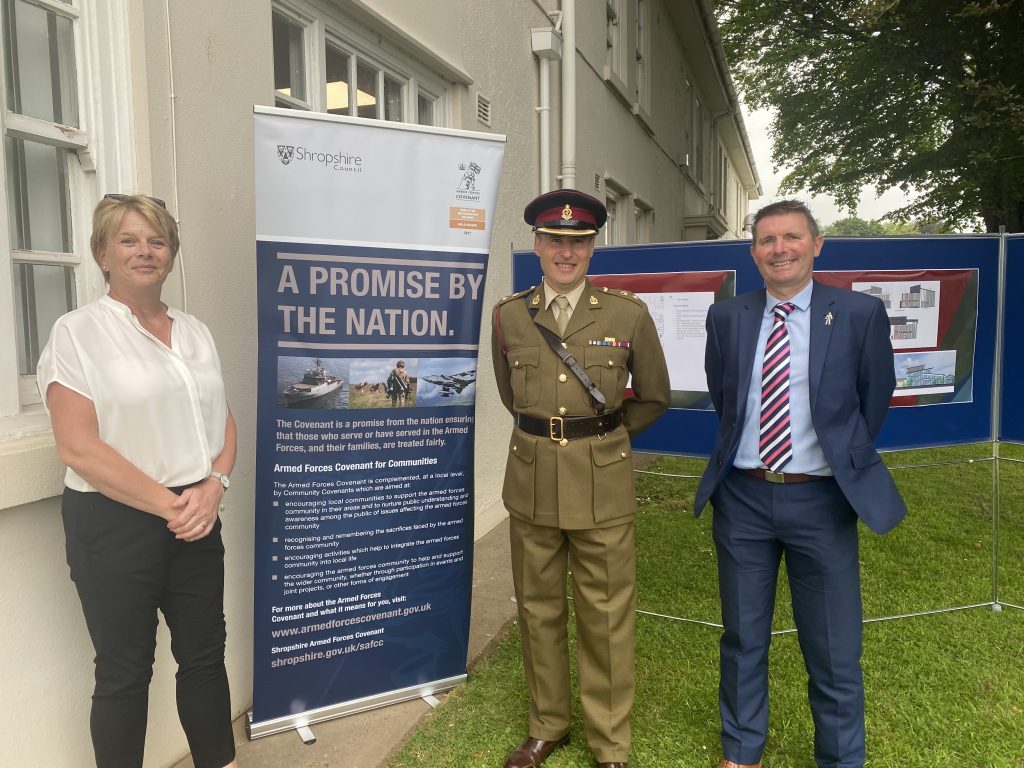 “The breaking of the ground to mark the start of the build of the Headley Court Veterans’ Orthopaedic Centre is a day I have long dreamt about, as this marks the beginning of a new era of bespoke care for our veteran patients and serving personnel.

“For a number of years now, we have talked about veterans being seen in an environment that brings comfort to them and by clinical teams that have an understanding of military personnel and their unique needs – and that is going to be the reality, which is just fantastic.

“These are individuals who have served their country and now need looking after in their time of need. There are very few professions where going to work places you at risk of dying or being severely injured, and I think that level of commitment and service should absolutely be recognised – and I feel proud that RJAH recognises this.

“Thanks must go to the Trustees of the Headley Court Charity for their amazingly generous grant and for believing in what we’re doing here, and ultimately supporting our long-term vision for world class veterans’ healthcare.”

The £6 million two-storey building will feature nine standard examination rooms. There will also be clinic rooms, which will also be utilised for Physiotherapy appointments.

It will also include a treatment and procedure room, an assessment room and a splinting and therapy room, as well as clinic space for virtual appointments.

In the main entrance foyer of the centre, there will be a café, as well as a dedicated Veterans’ Hub, where Shropshire Council and military charities will provide support to veterans, their family and friends, in relation to issues that range from homelessness, finance, debt management, welfare, benefits, health and PTSD, to name a few.

The upstairs of the centre will feature dedicated Research offices, clinical teaching and training space for staff, a multi-disciplinary team room, and an office for admin staff.

The centre will be built to the highest standards and have a familiar military feel to make veteran patients welcome and at ease.

“What a proud moment for us to cut the turf and officially get work underway on the country’s first dedicated orthopaedic centre for veterans and service personnel.

“Thank you to the Headley Court Charity for their immense support, as well as understanding what we are setting out to achieve. The build of this centre is going to make a huge difference to our veterans and serving personnel, who deserve the very best standards of care possible.”

This milestone has been a long time coming and I am an extremely proud Chief Executive knowing that we are building the country’s first dedicated NHS veterans’ orthopaedic centre, expanding on the already excellent Veterans’ Orthopaedic Service that we provide.

“I echo Frank’s gratitude to the Trustees of the Headley Court Charity but I would also like to take this opportunity to thank the individuals, organisations and members of the community, who backed this vision by donating and raising funds for us, when we initially launched the appeal.”

“The principle object of the Headley Court Charity, since inception in 1947, has been the medical rehabilitation of injured members of the Armed Forces.

“The charity has revised its objects to include the care of veterans and it thus fitting, given the link with Sir Robert Jones, who is widely regarded as the founding father of medical rehabilitation, that we should partner with The Robert Jones and Agnes Hunt Orthopaedic Hospital to create this unique facility for our veterans.

“We are delighted that the facility will be named the Headley Court Veterans Orthopaedic Centre.”

The project will also bring a major economic boost to the local area, as the main contractor, Pave Aways, is based just under eight miles from the site of the new centre and, wherever the specification allows, will utilise businesses in its supply chain located within 40-miles of the hospital.

We are honoured to have been chosen to deliver this important facility for the Trust and Headley Court. This contract renews our long-standing relationship with the hospital, where we have delivered a number of builds from operating theatres to its flagship main entrance.

“We have vast experience in the healthcare sector and look forward to handing over this state-of-the-art dedicated centre for military veterans in due course.”

The event was live-streamed via the hospital’s Facebook page. If you missed it, while it was happening, you can catch up here.

Tweet
mailto:?subject=News from our partners: Spades in the ground to deliver new dedicated veterans centre at RJAH&body=https%3A%2F%2Fnewsroom.shropshire.gov.uk%2F2021%2F06%2Fnews-from-our-partners-spades-in-the-ground-to-deliver-new-dedicated-veterans-centre-at-rjah%2F Share via e-mail