The Entertainer to relocate to new, bigger, store in Shrewsbury’s Darwin Centre 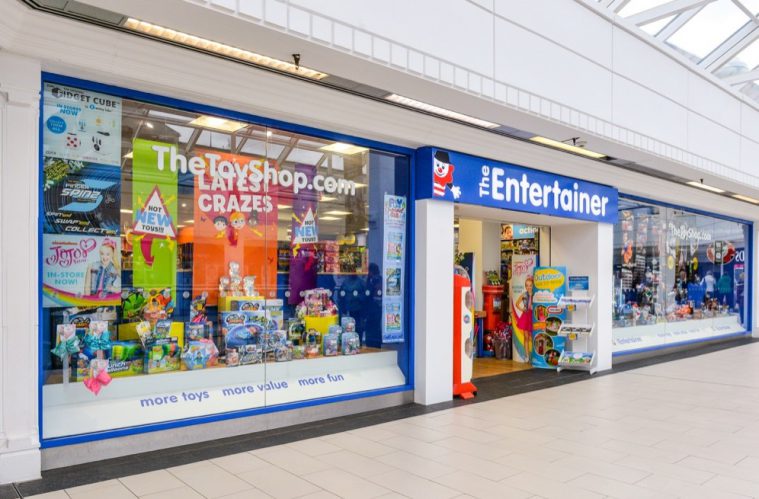 The Entertainer’s current store in the Pride Hill Centre

Toy retailer The Entertainer is to relocate its Shrewsbury store from the Pride Hill Centre to a new bigger home in the town’s Darwin Centre.

The new unit (formerly Poundland) is a larger space and will allow for an even bigger selection of the latest toys and games from The Entertainer, offering even more choice for customers.

The existing store team will transfer to the new store.

The Pride Hill Centre store will remain open until the new store opens.

Andrew Milner Walker, Head of Property at The Entertainer said:

“We are delighted to be moving The Entertainer into the Darwin Centre.  The additional space will allow us to offer the people of Shrewsbury an even better selection of all the latest toys and games.  We look forward to the new store opening in July.”

“We’re really pleased that The Entertainer is relocating to the Darwin Centre and have committed their future to Shrewsbury. This is great news for the centre, for the town and for local people.

“I look forward to welcoming them to their new home and wish them every success once the new store opens.”

A number of stores have already relocated from the Pride Hill Centre to the Darwin Centre, as part of plans to develop the Pride Hill Centre and to establish the Darwin Centre as Shrewsbury’s primary shopping centre. This includes several independent retailers who have moved to The Collective independent traders’ gallery on the lower level of the Centre.

The Entertainer was founded in 1981 in Amersham, Buckinghamshire by husband and wife team, Gary and Catherine Grant who, along with two of their sons, instil the driving force and mission – “To be the best-loved toyshop – one child, one community at a time”. Today, it continues to be the largest family-owned chain of toy shops in the UK with a total of 171 stores.

As well as a strong High Street presence, The Entertainer has a successful website (TheToyShop.com) which offers a 30-minute click and collect service and has over 29 million visits annually. The Entertainer is also recognised for its charitable giving. Each year it tithes 10% of its pre-tax annual profit to charity.  In addition to this, employees are encouraged to donate directly through Payroll Giving, with The Entertainer matching each donation pound for pound and raising over £1m to date. The Entertainer is also an active member of the Pennies scheme, the digital upgrade of the traditional charity collecting box, which enables customers to donate a few pence to charity at the point of sale when paying by card. On average, this generates £14,500 of customer donations to Children’s hospitals each week and has raised over £3m since it was introduced. The Entertainer currently employs over 1500 staff across the stores and a further 231 in the Head Office in Amersham, Buckinghamshire.

In December 2018 The Entertainer acquired POLY, a chain of 39 toy shops in Spain.

In February 2019 the Early Learning Centre was also acquired consisting of over 300 franchise stores internationally.

Gary Grant was named among the 100 most influential people in retail in the Retail 100 2020.

2) To follow Shrewsbury shopping centres on social media, go to: