News from our partners: Murder mystery at The Mere for readers group anniversary

A murder mystery set in the picturesque surroundings of The Mere at Ellesmere is featured in a newly-published collection of short stories, following a link-up between a professional author and members of a local readers group.

Historical fiction writer Leslie Scase has based the  story – “Death near the Water’s Edge” – on a real-life Victorian tragedy in the town more than 150 years ago, and his tale also mentions a topical local issue—improving the town’s economy. 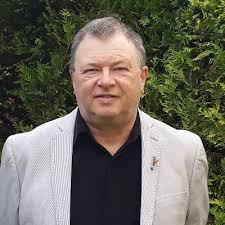 Leslie Scase, who lives in Shrewsbury, was commissioned last year to write the story to mark the 20th anniversary of the Ellesmere Library Readers Group, which is supported by Shropshire Council’s Libraries Service.

It forms part of an anthology of five stories published by the West Midlands Readers Network which works with libraries, independent bookshops and readers’ groups across the region.

As part of an annual project, the network matches five authors with selected groups to work in partnership by discussing story ideas, themes and setting. The writer then sets to work to produce a bespoke story.

“I just hoped they weren’t going to ask for a contemporary horror story loaded with gory scenes and strong language. I’m pleased to say that they didn’t. In fact my remit was fairly wide and I was able to set the story in my favourite Victorian period.  I wasn’t required to set it in Ellesmere, but I felt it would be a nice touch to do so. The Mere itself would prove an obvious backdrop and I thought I would give a mischievous nod to a topical issue relating to the town.”

Leslie Scase, a retired civil servant, is member of the Crime Writers’ Association and author of “Fortuna’s Deadly Shadow”, a crime thriller set in the heyday of Victorian Britain. His second novel, “Fatal Solution”, is due to be published in paperback and e-book format in April, with support from the West Midlands Readers Network.

He said writing the short story for the Ellesmere group had been “an honour and a challenge; an honour because the story was marking an important anniversary for the group, and challenge because I’m not really a writer of short stories.”

Retired librarian Sue Ardill, who has led the readers’ group since it was formed in 2000, said:

“We’re delighted that Leslie has been able to produce a gripping and very well-written ‘who-done-it’, and it’s very appropriate that the story is actually set in Ellesmere. It’s unfortunate that because of the pandemic, we were unable to sit down and work with the author as usually happens, but I’m sure everyone in the group will be thrilled with the result. It was a privilege to be chosen for this prestigious short story project in our 20th anniversary year and we’re very grateful to Leslie and the Readers’ Network.

“We had only ten to a dozen members in the group when it started 20 years ago and our numbers have virtually doubled over two decades. Hopefully, it won’t be too long before the coronavirus restrictions are lifted and we can resume our monthly meetings at the library and have a real celebration with Leslie as our guest of honour. In the meantime, our members are still receiving two books every month to read and review, and we have set up a Facebook group to keep in touch and exchange comments.”

“It’s been a real delight to bring this anthology to fruition in this most challenging of years.”

Tweet
mailto:?subject=News from our partners: Murder mystery at The Mere for readers group anniversary&body=https%3A%2F%2Fnewsroom.shropshire.gov.uk%2F2021%2F01%2Fmurder-mystery-at-the-mere%2F Share via e-mail