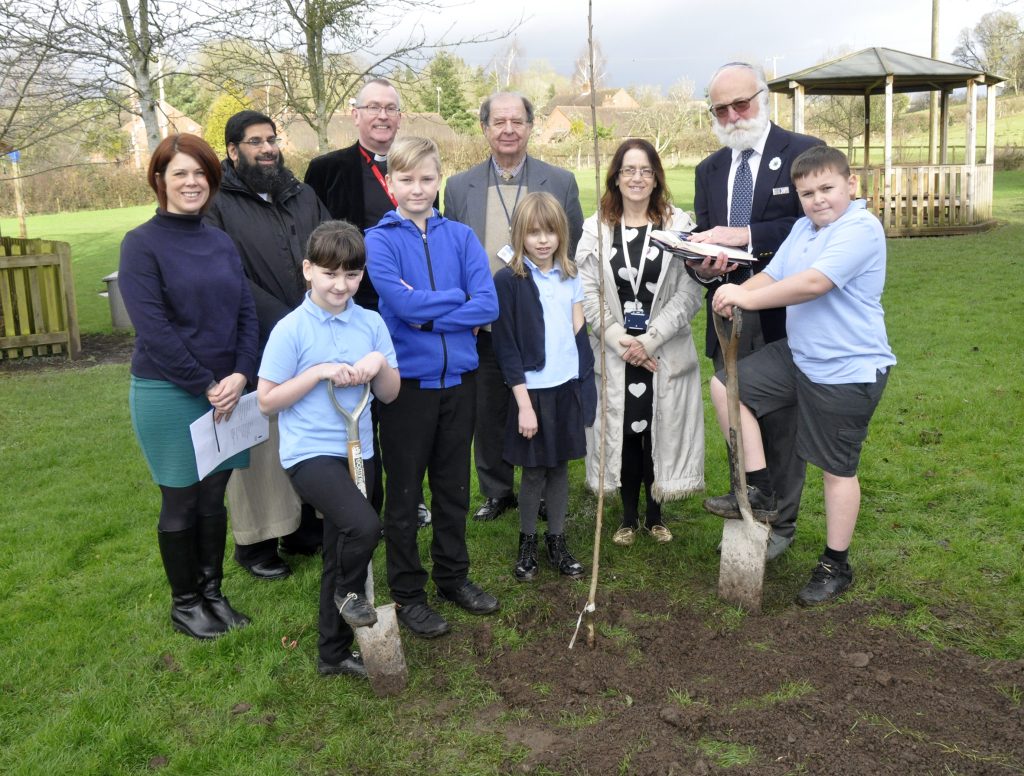 This year, for which the theme is “Stand Together”, saw national Holocaust Memorial Day marked with the planting of the 11th and 12th trees with the two schools in the south west, and the measuring of the first tree, planted at Mereside in 2015. 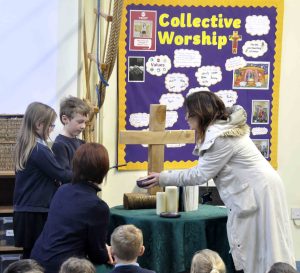 “This year marks the 75th anniversary of the liberation of Auschwitz concentration camp. As we lose the last survivors who can give a first-hand account, it becomes even more important that we continue to communicate this essential message to future generations.”

Local Shropshire Councillors David Evans and Ruth Houghton helped to plant the trees at Onny and at Lydbury North respectively, with four pupils helping in each case. This followed school assemblies, where the councillors, Mark Michaels and Imam Sohayb Peerbhai spoke to the children, and at which the children sang a song they had learnt for the occasion. The youngest and oldest children lit a candle of remembrance at each school. Prayers were also said by the interfaith forums. 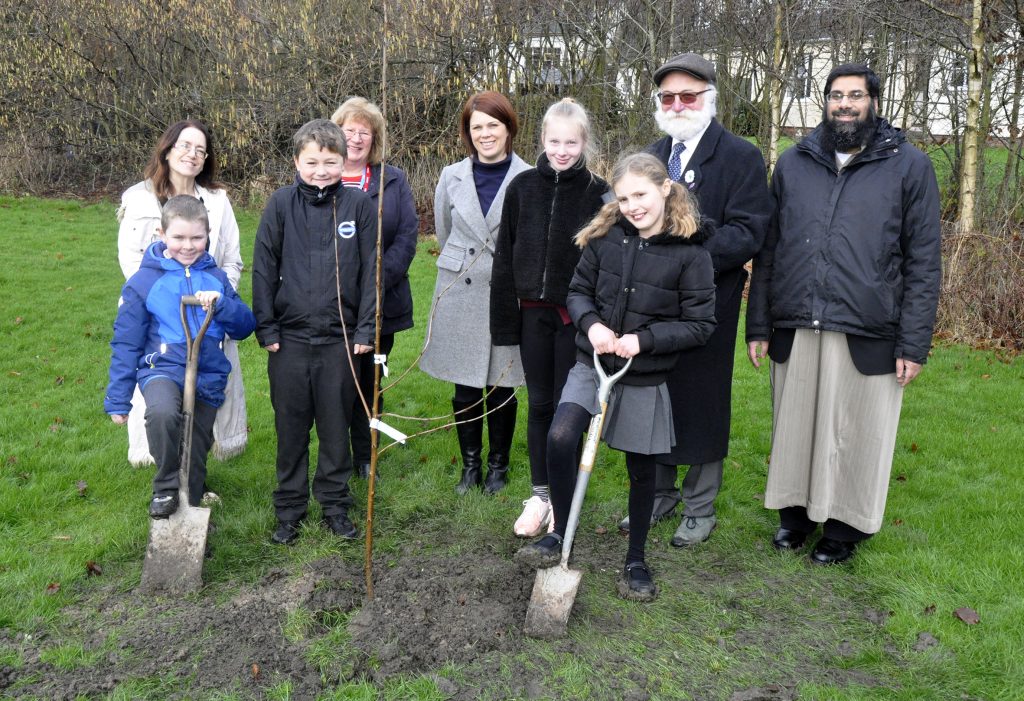 Ruth Houghton (Bishop’s Castle) and David Evans (Church Stretton and Craven Arms), are local Shropshire Councillors for the areas in which the schools operate, and said:

“The children at Onny and Lydbury North were an absolute credit to themselves and to their schools as the St Michael’s Federation, very much living up to the theme of “Stand Together”. Letters of thanks will be coming out to them from Shropshire Council, in which we will include how impressed Imam Sohayb Peerbhai and Mark Michaels were as well, and how much they enjoyed talking with the children. 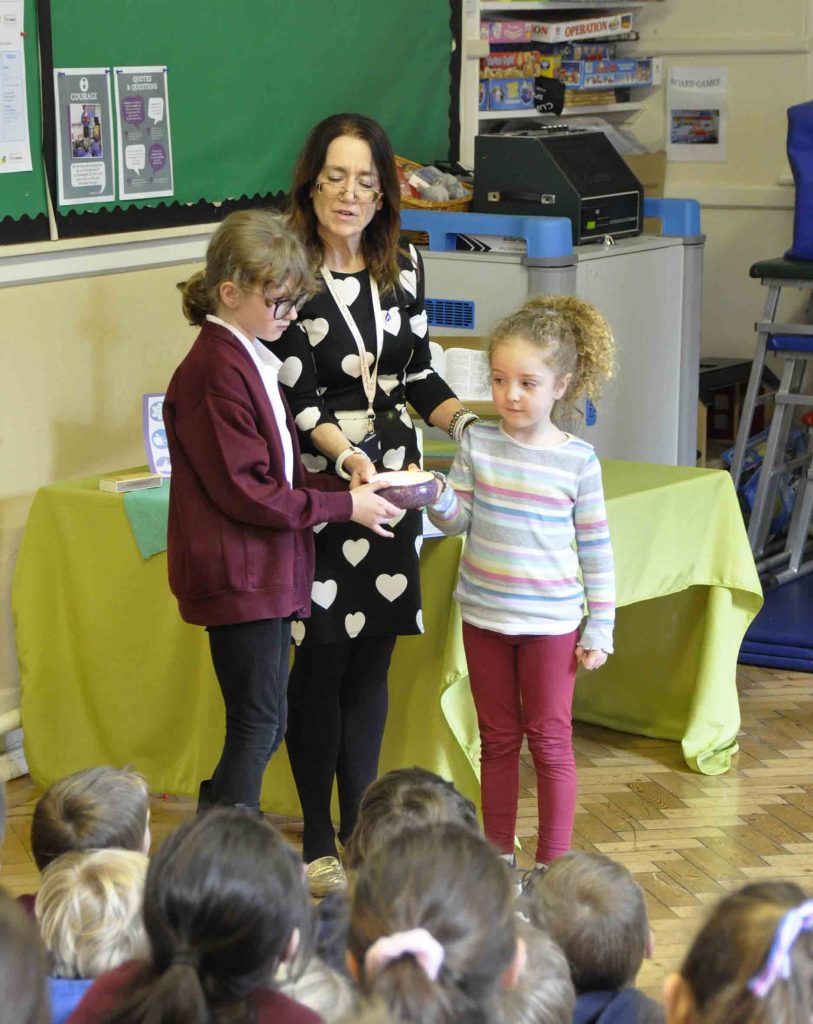 “Where the Onny tree has now been planted, in the field near to St Michael’s Church, used to be allotments that the children tended to back in the day when I was at school here. It will be grand to see this tree growing and being looked after by this generation of children. The tree planting at Onny was absolutely fantastic, and the way the children conducted themselves was great. The singing was out of this world and it was a pleasure to take part. Well done Onny.”

“The tree at Lydbury North is the first tree that I have been privileged to plant as a Shropshire Councillor, and it was a pleasure to be involved. I am particularly pleased about the Syrian refugee family involvement in the successful South Shropshire Interfaith Forum art project around the cherry tree motif, given my role in supporting and placing refugee families whilst I was an officer at the council. I will be back to visit the tree as well as the children, as a lifelong resident of this beautiful rural part of Shropshire, and I will enjoy watching it flourish.”

Local Shropshire Councillors Jane Mackenzie and Tony Parsons (who both represent Bayston Hill, Column and Sutton) took part in a ceremony at the Mereside tree, where children had individually prepared narratives about personal experiences of the Holocaust and what it must have been like. Reverent Ken Chippindale, for the Shrewsbury Interfaith Forum, read the prayer at this ceremony, where Mr Michaels and Imam Sohayb Peerbhai also spoke with the children.

“It is lovely to see that this first tree we planted together here at Mereside in 2015 is now clearing three metres in height, and that it has lots of buds coming.  It was a pleasure to hear from the children, and along with Tony Parsons I must commend the children on showing how important it is to think of the individuals who lived through the atrocity as well as those who did not. I am sure they will continue to look after their tree.”

“We have been very fortunate in the support we continue to have from the South Shropshire Interfaith Forum and the Shrewsbury Interfaith Forum, alongside local Shropshire Councillors, in working with primary schools since 2015 on this initiative. Our joint efforts are very much focused on helping local schoolpupils to learn about the Holocaust and other genocides and to learn about the importance of faiths working together.

In planting these trees, our aim is to provide a fitting memorial for those who survived the Holocaust and other genocides, and for those who did not, which will grow with the children and spread a message of peace. I echo the words of Gwilym Butler, Shropshire Council’s Cabinet member for communities, place planning and regulatory services, before these ceremonies, whose stated hope is that: ‘every child involved in the 2020 ceremonies in the south west, at the first tree planted at Mereside in 2015, and in any other ceremonies in schools across the county, will take these lessons to heart and grow up to help make this world a better place.'”

The two cherry trees were planted on the morning of Monday 27 January 2020, one at Onny School and one at Lydbury North School: one from Shropshire Council and one from the South Shropshire Interfaith Forum. The schools together form the St Michael’s Federation and take trees as their theme, growing together, making it a very apt choice for 2020.

The council was once again supported by Mereside School, where the first cherry tree was planted in 2015, and returned to Mereside in the afternoon for a ceremony with Shrewsbury Interfaith Forum, South Shropshire Interfaith Forum, and Jane Mackenzie and Tony Parsons, local Shropshire Councillors for Bayston Hill, Column and Sutton. The Mereside tree was measured by the children in 2019 as being 2.9 metres at that time.

In addition to the ceremonies a display in the foyer at Shirehall in Shrewsbury ran through from Wednesday 22 January to Wednesday 29 January 2020.

The local background here is that Shropshire Council is continuing efforts to grow a cherry tree orchard of remembrance across Shropshire, working with primary and secondary schools, with Shrewsbury Interfaith Forum and South Shropshire Interfaith Forum, and with local Shropshire Councillors. We identify a primary school each year, and are seeking to spread the orchard across the county and to cover all points of the compass in so doing. The schools for 2020 represent the south and west of the county.

The orchard had a growth spurt in 2016, when we were also able to provide for five secondary schools to have trees as well, through the Incredible Edible project running that year. Having begun in the centre in 2015, with Mereside C of E School, we have planted in the north at Woodside Academy in Oswestry, and in the south at Bishop Hooper School in Ashford Carbonell, where a second tree, kindly donated by the South Shropshire Interfaith Forum, had to be planted in 2018 after rabbits ate the first one. The tree for the centre and west of the county was planted at Trinity CofE in Ford in 2018. The 2019 tree was planted at St Peter’s CofE School in Wem, representing the north and east of the county.

South Shropshire Interfaith Forum was successful in a bid to see artwork selected for a national exhibition to mark 75 years since the liberation of Auschwitz, held in London as part of the national service of remembrance on Holocaust Memorial Day, Monday 27 January 2020.

The artwork was produced by local children from Syrian refugee families settled in Shropshire, at a family event held at the mosque in Craven Arms. It takes the cherry tree leaf as its motif in recognition of the work that the South Shropshire Interfaith Forum and the Shrewsbury Interfaith Forum carry out with the council and local primary schools to plant a memorial cherry tree every year in Shropshire. It comprises painted leaves that together form a flame, over a map of Shropshire.

Schools that are planning or have carried out commemorative activities, now or later in the year, are asked to contact the council, in order that a full round up might then be possible to share at national level. Schools with cherry trees have also been asked to measure them in order see how they are growing in each locality. Activities do not have to be confined to around the date of national Holocaust Memorial Day.

For more information about the 2020 theme, please see resources on the HMD Trust website at www.hmd.org.uk