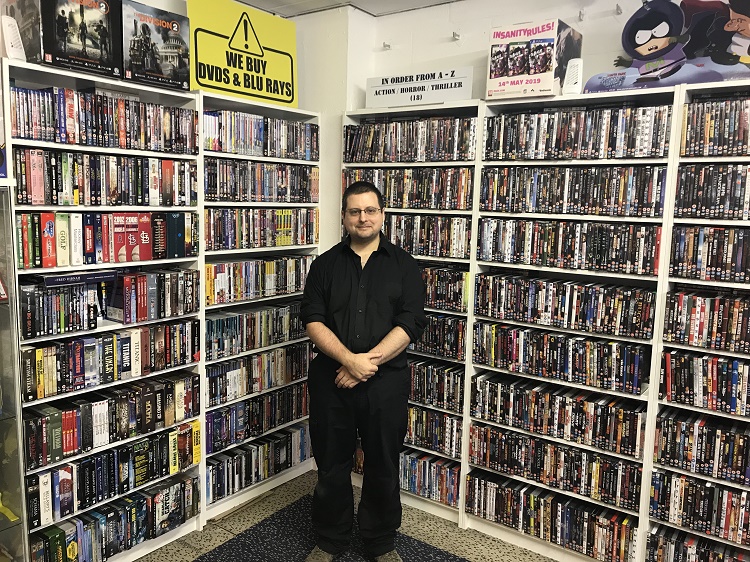 A Shrewsbury-based buyer and seller of DVDs and computer games and consoles has high hopes for the future, having just celebrated four successful years of trading in the town.

DVD Megastore was opened by Estaban Bridges in July 2015, and is the only independent supplier of new games and consoles in Shrewsbury.

Now based on the bottom floor of the Pride Hill Shopping Centre, the business originally started in the town’s indoor market as part of the Prince’s Trust New Enterprise Initiative. Within a month they had moved into their first shop and two further moves followed, each time to bigger premises.

The story behind the creation of the shop – and its subsequent success – saw Estaban named a finalist in the Prince’s Trust NatWest Entrepreneur of the Year Award in 2016.

“Shrewsbury has always had an inviting and busy market hall, so the decision to start there was an easy first step to take. Soon after, Phoenix Management (Community Spaces) obtained the agreement for the enterprise zones in the Riverside Shopping Centre, and this offered a perfect opportunity for growth, which other areas didn’t offer at the time.

“As with all retail and business as a whole it’s been a roller coaster ride of ups and downs. Suppliers and customers have come and gone, but we remain positive with high hopes for the future and a determination to ride out any storm that comes our way. The support from our customers far and wide has been, and always will be, greatly appreciated.”

DVD Megastore has a wide range of customers, of all ages and backgrounds and – with more than 10,000 items on their shelves – Esteban says they have something for everyone.

“Along with all the classics that you would expect to find we have hundreds of discontinued DVDs – films that are hard to obtain and not available of the major streaming sites. Combined with an extensive array of computer games and consoles we tick many boxes for many people.

“No-one else in Shrewsbury has got such an array of pre-owned films, box-sets, blu-rays and games all in one place.”

Since DVD Megastore opened, the business has been ever-changing in terms of products on offer, and the ways in which they’re offered, and has adapted with the times.

“We removed ourselves from online selling sites and took attention away from our website to promote visits to the store. Our fixtures and fittings have grown with us so that we can max out the space we have and have as much on display as possible.”

As for the future, Estaban says that they would like a shop at least twice the size so that they can sell new and pre-owned books alongside the DVDs, computer games and consoles, as well as official merchandise.

And what does he feel is the best thing about running a small shop?

“It’s the satisfaction in seeing positive growth, seeing the regulars and having a natter! The feeling of accomplishment in being able to provide employment to local people , and also providing a service which makes people want to come in and have a browse. Overall it’s the ‘I created this’ moment!”

DVD Megastore is located on the bottom floor of the Pride Hill Centre, opposite Wilko.

For more information click here, or go to www.dvdmegastore.co.uk.