Pick up the phone you’re not alone: further support for people concerned about suicide

A new card offering advice and support to those suffering from suicidal thoughts has been launched across Shropshire and Telford and Wrekin.

The launch, at Shropshire’s Health and Wellbeing Board, marks World Suicide Prevention Day (Tuesday 10 September 2019) whereby communities across the world come together to raise awareness of suicide prevention.

Designed by Shropshire and Telford Suicide Prevention Network in collaboration with those who have been affected by suicide, the Zcards are aimed at people of all ages who are experiencing suicidal thoughts or who are concerned for others. 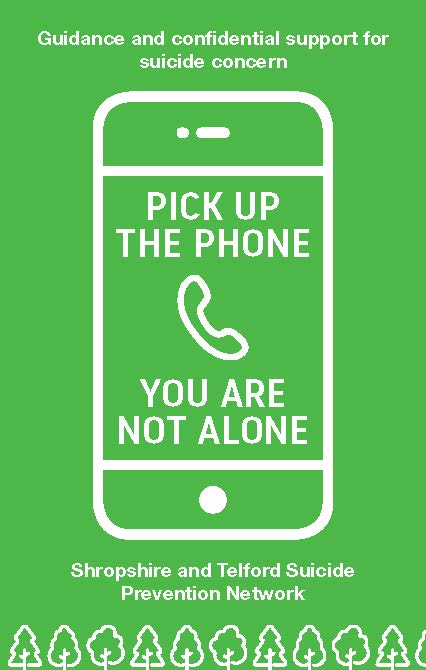 The Zcard is small enough to be easily carried in a wallet, purse or pocket so as to be used as reference whenever needed and provides:

Suicide affects all types of people and communities and is associated with a wide variety of factors such as depression, alcohol and drug misuse, unemployment, family and relationship problems, social isolation and loneliness.

Between 2013 and 2015 there were 131 deaths formally recorded as suicide across Shropshire and Telford. These numbers are likely to be underestimated due to the legal necessities for categorising a suicide death.

“We all need to work together to reduce self-harm and suicide attempts. We want to get more people talking about self-harm, suicide and the risk factors associated with suicide in order to destigmatise and encourage people to seek help when they feel it is needed.

“We hope the new Zcards provide the opportunity to raise awareness that there is support out there and encourage those affected by suicide, to come forward.

“The Zcards can help people, in particular those high risk individuals who may have little or no contact with formal health or social care services, to the right support quickly. You are not alone, we are here to help.”

“It’s important for people talk, whatever they might be going through. These Zcards will let you know where you can find confidential and non-judgmental support.”

“We know that suicide is a very sensitive and complex issue and can affect so many people. We want to ensure that that those at risk or affected by suicide, are signposted to and can access the support and agencies that they require at the right time.

“I am really pleased to see that organisations and individuals have come together to produce these information cards and that it will help those who are suffering, to pick up the phone and seek help.”

The Zcards will be distributed to various locations across Shropshire and Telford and Wrekin, including GP practices, hospitals, libraries, businesses, customer service points to name a few.

Anyone, whether you’re a child or an adult needing support or just someone to talk to, should call the Samaritans 24-hour support service on 116 123 or make an urgent appointment to see their GP.

Shropshire and Telford and Wrekin’s Suicide Prevention Network is made up of representatives from the following organisations:

The Zcards have been produced as part of the Shropshire and Telford Joint Suicide Prevention Strategy (launched in 2017). Shropshire’s Joint Suicide Prevention Strategy aims to help those at risk of considering suicide or self-harm. The strategy aspires to prevent all deaths from suicide in the region and sets out actions to ensure those at risk or affected by suicide are signposted to, and can access, the support and agencies that they require at the right time and aims to: 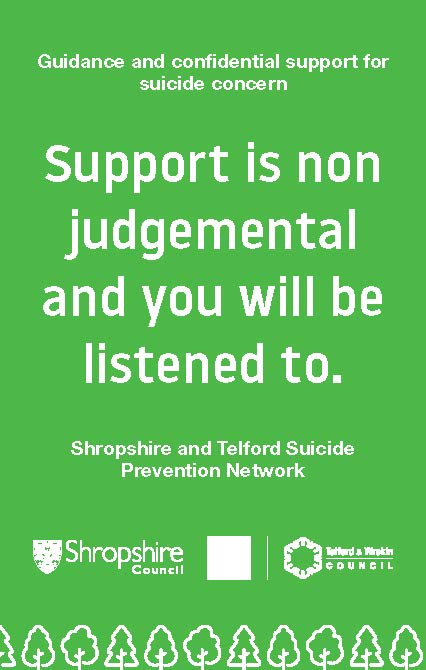 Suicide is a complex topic and sensitivity is needed by the media when reporting about it. We would recommend that all journalists read the media guidelines produced by the Samaritans. They can be found here.

There is growing evidence of the association between self-harm and increased risk of death by suicide, even though many people who self-harm do not intend to take their own life.

Certain occupations are at greater risk from an individual’s likelihood of attempting suicide, which include doctors, vets and farmers. There is therefore opportunity to reach people through support in the workplace.

Recent evidence from Public Health England suggests higher risk of suicide is higher in males with lower skilled occupations compared to the national average.  Males in labourer/construction roles have three times average risk, whereas those in skilled trades (such as plasters or painters) have double average risk.

Highest occupation risk of suicide for females is associated to the nursing profession and primary/nursery school teachers.

Both males and females working in culture, media, performance/entertainer or sports occupations have a higher than average risk of suicide.

World Suicide Prevention Day is organised by International Association for Suicide Prevention (IASP) and the World Health Organisation (WHO) and, which is held each year on 10 September. The World Health Organisation reports that over 800,000 people worldwide die by suicide each year. This corresponds to one death by suicide every 40 seconds. The number of lives lost each year through suicide exceeds the number of deaths due to murder and war combined.

Tweet
mailto:?subject=Pick up the phone you’re not alone: further support for people concerned about suicide&body=https%3A%2F%2Fnewsroom.shropshire.gov.uk%2F2019%2F09%2Fsuicide-zcards-prevention%2F Share via e-mail