During the last two weeks of August the first official archaeological dig of Nesscliffe Hillfort was undertaken by Southampton and Oxford University and yielded finds of national significance.

The archaeological dig is the result of several years of previous work by Shropshire Council including habitat management, site protection measures, photographic analysis and geophysical surveys.

Archaeological test pits were also dug and revealed an occupation layer with some layer of 2nd Century Roman pottery. The hillfort was probably constructed in the Iron Age, 500 BC. 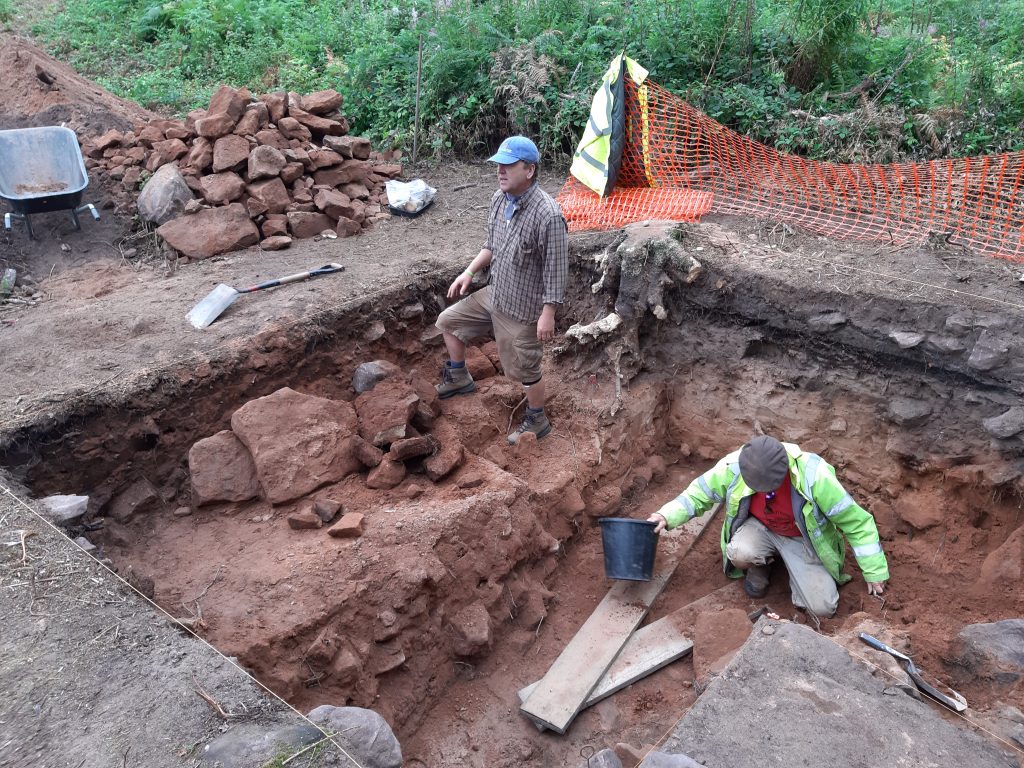 Some of the team in the trench during the dig

Gary Lock, Emeritus Professor of Archaeology at Oxford University and Co-Director of the excavation, said:

Hillforts are one of the most impressive types of archaeological sites and yet are poorly understood.

The hillfort at Nesscliffe, built against the sheer cliffs at Oliver’s Point would have been easily defendable and also very visible in the landscape.

Two trenches were excavated, the first of which established the structure of the inner rampart.  This is 8m wide with stone revetting faces and the middle filled with stone and sand all on a levelled surface.

In the second trench the discovery of guard chambers is of ‘national significance’ and certainly has the archaeologists very excited about a return visit next summer.

The north eastern entrance to the hillfort, where part of this year’s dig took place, unearthed what are known as guard chambers. These would have stood at the end of an entrance passage at either side of the roadway into the interior. This is an exciting discovery for the archaeologists as few of these structures have been excavated nationally.

Research into the Iron Age hillforts would benefit greatly if the archaeologists could excavate the current path leading to Oliver’s Point and we will be working with our access officers to facilitate this and provide an alternative route onto the site. Further excavations in years to come are guaranteed to reveal more secrets and we will hopefully discover roundhouses and other structures and finds which enables us to picture Shropshire life 2000 years ago.

It’s an exciting time in the discovery of Shropshire’s history. The success of the archaeological dig at Nesscliffe Hillfort follows the recent finds of national significance at Shrewsbury Castle further proving the rich history of Shropshire dating back thousands of years.

It’s great to know that there is a desire to further explore the Hillfort next year which will broaden our understanding of the area and help us improve even further the management of the site.

Shropshire Council’s Outdoor Partnerships team manage Nesscliffe Hill Country Park in partnership with the Natural & Historic Environment Team and will be ensuring that the public are given every opportunity to engage with what has been discovered through new interpretation and opportunities to get involved with the dig next year.

In the long term we need to protect the hillfort, this we will be doing by heathland creation to control tree seedlings which damage the archaeology beneath.