News from our partners: Home And Dry: Professionals unite to prevent water deaths

News from our partner the West Mercia Police and Crime Commissioner

The West Mercia Police and Crime Commissioner and a range of other agencies, are uniting to drive a campaign to ensure people get home and dry. 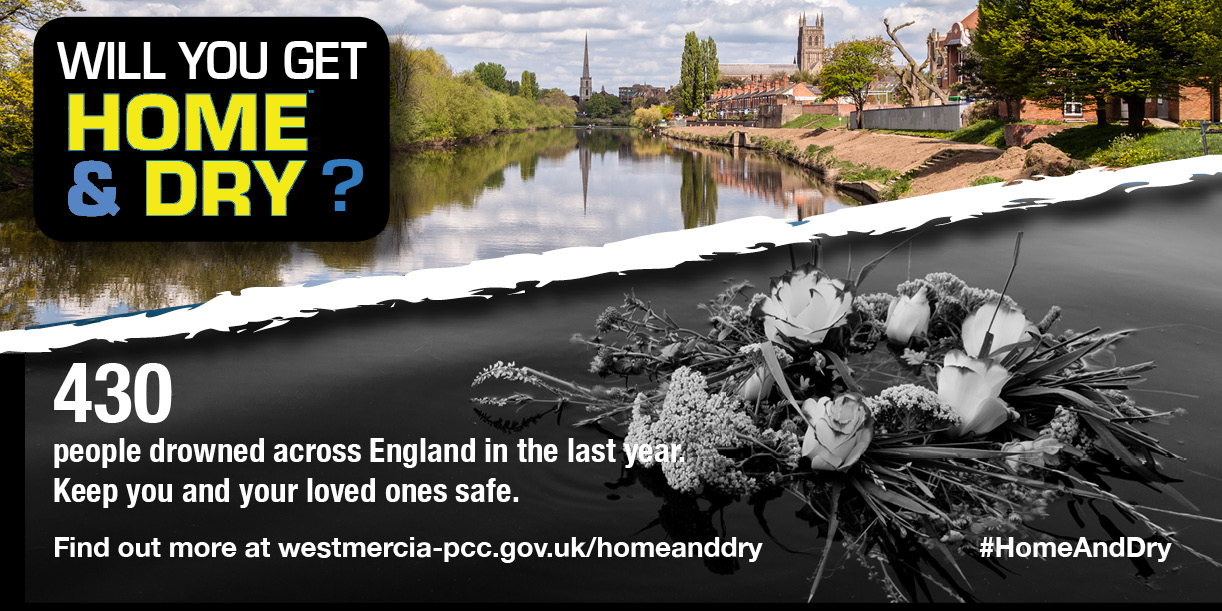 Will you get home and dry?

The Home and Dry Network has worked collectively and extensively to tackle the very roots of the issue- improved education around water safety, physical prevention, work around the night time economy and mental health awareness.

“The awful loss of life, has shook our communities. We are taking a strong united approach, which draws upon the expertise of a number of agencies and builds upon the existing good work.

“I look forward to driving this campaign forward. Together we want to reduce the number of deaths, ensure emergency and voluntary resources aren’t drawn to incidents that could have been prevented, and ultimately keep our communities safe.”

For more information on the campaign visit: www.westmercia-pcc.gov.uk/homeanddry

The Home and Dry Campaign was first launched in 2017 by West Mercia Search and Rescue, a volunteer led organisation who receive grant funding from the Police and Crime Commissioner. The campaign, backed by Water Safety Ambassador Kirsty Walsh, includes a free online water safety course, and an offline version for schools and colleges. Take part in the course here: https://westmerciasar.org.uk/homeanddry/free-water-safety-online-course/

Following on from this, the Home and Dry Network, chaired by the Police and Crime Commissioner was established, to drive this work forward. At the first meeting in August 2018, work began to collate existing work around water safety and build on best practice, look at ways to educate and inform communities, in order to keep them safe.

The Network has worked collectively to build a campaign, which focuses around these key areas and will continue over the coming months.

The event on 12 July 2019 will be an opportunity for each of the agencies to jointly promote water safety, unveil multi-agency promotional materials, for opportunities to further expand the network and the campaign, and to hear first hand the experiences from the families directly affected by water deaths.

The most up to date figures from the WAID (Water Incident Database) are as follows:

The figures are broadly similar to the 2017 figures, in which 429 people drowned across England:

For the full figures visit: https://www.nationalwatersafety.org.uk/waid/