An innovative new way of repairing Shropshire’s potholes more quickly, quietly and effectively is to be trialled on urban roads in Whitchurch and Market Drayton, starting on Monday 5 August [2019].

The work will be carried out overnight for five nights – helping to minimise disruption to residents, businesses and road users.

Its focus will be to repair a large number of potholes, and it’s anticipated that up to 50 could be repaired each night – the current rate is around 20 per week.

Under the new process, potholes are cleaned out, filled with a unique material called Texpatch, then covered with a neat, square patch. This will provide a longer-lasting, smoother, neater finish compared to traditional pothole repairs.

Using this process for treating urban potholes will also free up crews to tackle potholes in rural areas. 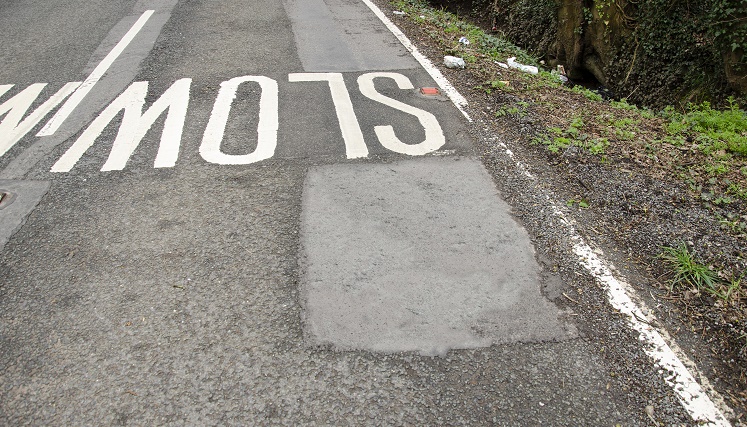 The above pothole three months after being treated

“No-one likes potholes and we want to repair them as quickly and effectively as we can. The trial is expected to show a fall in the time it takes to repair a pothole, but also a fall in the cost of the repair – which is a real bonus.

“The work is also much quieter than traditional repairs. As it doesn’t require the use of mechanical tools – other than the air hose which will be used to clean out debris from the defect – it can be carried out at night. And night working allows more work to be carried out as there aren’t the same traffic restrictions.

“Likewise, the process is so quick it’s classed as mobile works and therefore traffic management won’t be needed for the vast majority of the repairs, reducing disruption and inconvenience to road users while work is carried out.”

If the first phase of the trial proves to be successful it will be extended to include minor defects not usually rectified under Shropshire Council’s highway safety inspection manual. This will help in preventing future potholes appearing as part of a proactive treatment.

And once phase two of the trial is completed, plans will be put in place to extend the new defect rectification process to the remaining urban areas in Shropshire.

The locations of the potholes set to be treated in Market Drayton can be seen here.

The locations of the potholes set to be treated  in Whitchurch can be seen here.

1) The traditional ‘cut out and fill’ method of repairing potholes doesn’t lend itself to night working due to the need for Stihl chain saws, jack hammers and Wacker plates.

2) For phase one of the trial all urban roads in Whitchurch and Market Drayton (south of the A53) with a 30mph or 40mph speed limit, were inspected and any potholes found on these roads will be treated.

3) Shropshire Council’s highways inspection manual sets out the council’s requirements for highway safety inspections – which are designed to identify all defects likely to create danger or serious inconvenience to network users or the wider community.

Tweet
mailto:?subject=New way of repairing potholes to be trialled in Whitchurch and Market Drayton&body=https%3A%2F%2Fnewsroom.shropshire.gov.uk%2F2019%2F07%2Fnew-way-of-repairing-potholes-to-be-trialled-in-whitchurch-and-market-drayton%2F Share via e-mail