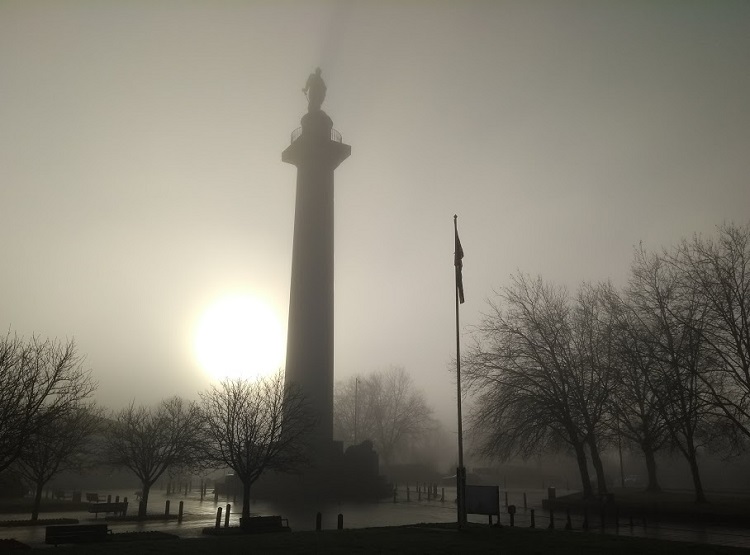 The statue of Lord Hill on top of The Column in Shrewsbury will be inspected by stonemasons on Monday 25 February [2019] after several small pieces of stone were found on the ground close to The Column last week.

An initial inspection by council engineers has suggested that the debris may have fallen from the statue following recent high winds and freezing temperatures.

Now, stonemasons will go up in a cherry picker on Monday to inspect the current condition of the statue and The Column, to determine the likely source and cause of the fallen debris, and to decide if any action is needed to help prevent further debris falling to the ground. The inspection is due to start at around 8am, weather permitting.

In the meantime the situation will be closely monitored and any safety concerns will be dealt with appropriately.

Shropshire Council and the Friends of Lord Hill’s Column are currently working to secure the funding needed to replace the statue of Lord Hill with an exact replica made from its original material, Coade stone.

“Lord Hill famously fought in a number of battles, but his biggest enemy is undoubtedly the weather – especially heavy rain, frost and wind. Our priority is to ensure the safety of people passing by The Column so we’ve called in stonemasons to carry out a further assessment of the statue and to offer their professional advice about what action may be necessary.”

About The Column and Lord Hill

As owners of the grade 2* listed Lord Hill statue and The Column, Shropshire Council has a responsibility for maintaining the structure.

The Friends of Lord Hill’s Column group was formed in September 2013.

Completed in June 1816 The Column was erected in honour of the Right Honourable Rowland Lord Hill, Baron of Almarez in Spain, and of Hawkstone and Hardwick Grange, Shropshire; Commander-in-Chief of the British Army; a General in the Army; Governor of Plymouth, and Colonel of the Horse Guards Blue.

Born at Prees Hall, near Hawkstone in April 1772, Lord Hill fought alongside the Duke of Wellington at the Battle of Waterloo. The Column was erected to recognise his valour in this and other campaigns. He died at Hardwicke Grange near Shrewsbury in December 1842 and was buried in the churchyard at Hadnall.

The first stone was laid on December 27 1814 by the Salopian Lodge of Free Masons assisted by deputies from adjoining lodges, on the festival of St. John the Evangelist. The last stone was laid on 18 June 1816 the anniversary of the battle of Waterloo. The total expense was 5,972 pounds, 13 shillings and 2 pence.

The Grade II listed Column is 133 feet high (40.5 metres) and, when built, was the highest free-standing Greek Doric column in England. Its diameter is two feet wider than Nelson’s Column and, not including the pedestal, it is 13 feet higher.