Castlefields was the first school in the county to take up Shropshire Council’s offer of a free salt spreader – plus salt – for treating paths near the school during spells of wintry weather.

The school held a competition to name the spreader with Spready Mercury – suggested by Hugo Harris – the winning name.

With Shropshire Council already having a gritter of the same name – following a public vote in 2020 – the council arranged for the lorry to visit the school to meet Hugo, his classmates, and its namesake.

Spready Mercury is one of 25 gritting lorries used to treat roads across Shropshire during cold spells, such as the one experienced this month.

Since Monday 16 January the fleet of gritters, and their drivers, have been out more than a dozen times, often in the early hours of the morning, to help keep the roads safe for road users. 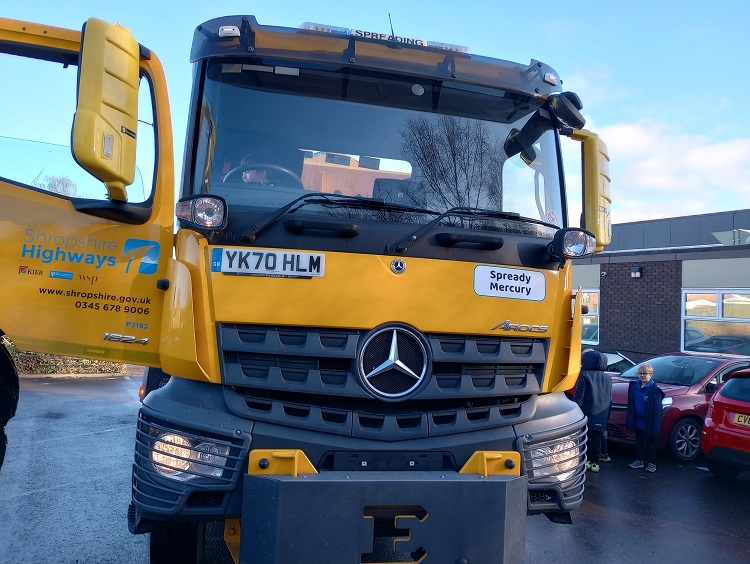 “Working with schools is a great way to ensure that the approaches to each school is treated during spells of icy weather, and to help children stay safe on their way to and from school. If any other schools would like to work with us we invite them to let us know.”

“We are so grateful to have been given the opportunity to work with Shropshire Council in this way. We will be able to monitor the situation locally and use our salt spreader when necessary.”

“Providing schools with salt and a spreader means that they can treat pavements at all other times, when temperatures drop and pavements may be icy.”

Any schools interested in having their own salt spreader should email Highwaysconsultation@shropshire.gov.uk.