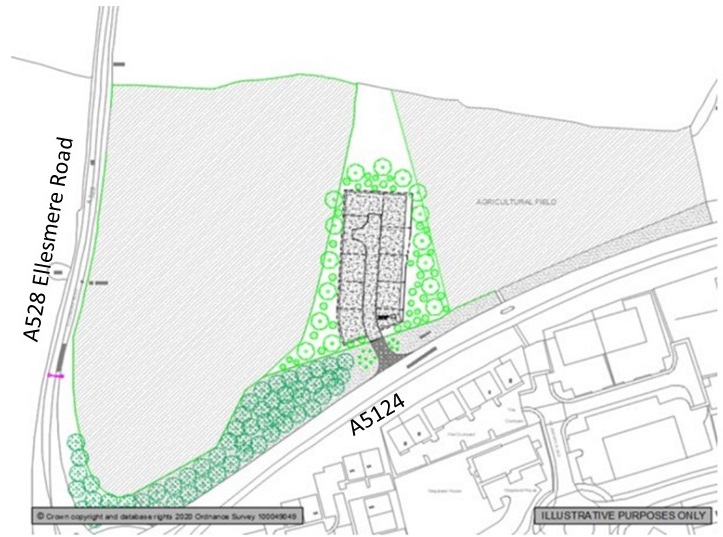 Illustration showing the site and its location

A temporary – five-year – traveller transit site is set to be established on the northwest edge of Shrewsbury, if Shropshire Council’s Cabinet agrees to the proposals at their meeting next week (6 July), and if planning permission is secured.

If follows a two-month public consultation into the plans in autumn 2020, with a report now going to Cabinet following a delay due to the pandemic. The consultation was designed to gather views relating to the proposal and to inform next steps for implementation.

The site  – which is intended to tackle the problem of unauthorised encampments in and around Shrewsbury – would provide a safe place for families to stay whilst passing through the county.

The proposed site is owned by Shropshire Council and lies to the north east corner of Ellesmere Road roundabout between the A5124 Battlefield Link Road and the A528 Shrewsbury Road. The site itself would be screened by a belt of trees.

The site would accommodate up to eight families for short periods of time, not exceeding three weeks at any one time.

Subject to Cabinet approval, a planning application would be submitted and it’s hoped that the site would be open within 12 months.

The consultation generated 55 responses. Of these opinion was mixed, though the aim to reduce unauthorised camps was widely supported.

A transit site within Shropshire is being proposed for several reasons.

Secondly, national planning policy for gypsy and traveller sites requires local authorities to identify and to seek to meet the permanent and transit accommodation needs of gypsies and travellers via the planning process.

Lastly, though the police have powers to evict unauthorised campers, these are discretionary.

“In recent years we’ve seen a number of unauthorised encampments in and around Shrewsbury and a significant number pitching on high profile locations such as the Park and Ride sites, Battlefield Enterprise Park and the retail business car parks, impacting both on the public and private sectors.

“Some areas within Shrewsbury experience regular unauthorised encampments, which can cause disruption and conflict locally, and can also be expensive and time-consuming to clear. And we cannot evict unauthorised camps if we have no provision to move them to.

“Such a transit site could, within a reasonably short timescale, deal with the ongoing and costly issues associated with such encampments and help ease the impact on local communities and businesses whilst longer term site provision is considered.

“We anticipate that the site will also have a positive impact on Gypsies and travellers, and on community relations between traveller and settled communities.”

The proposed site would be of basic construction, with a stone or grasscrete base, portable toilet block units (which will be removed during no occupation periods to prevent vandalism), CCTV, perimeter fencing and height restriction barriers on the entrance to the site.