Treasure has been declared by Mr Ellery, HM Senior Coroner for Shropshire and Telford & Wrekin at an inquest held last week.

In what may be the first treasure COVID-19 inquest for the country, Mr Ellery heard evidence via video conference from the British Museum’s Portable Antiquities Scheme (PAS) and one of the finders about two recent finds in Shropshire.

This small and delicate gold ring, designed to be worn on the finger, was discovered in the Frodesley area of Shropshire. Frodesley sits between the Iron Age hillfort of Caer Caradoc, near Church Stretton and the river Severn, both of which are within sight of the Wrekin – thought to be the regional capital of the Iron Age Tribe the Cornovii.

The ring was found by Christopher Mussell whilst metal detecting and is relatively plain and unadorned. It comprises a simple D sectioned circlet of gold formed into a distinctive V shape which when placed on the finger creates a distinctive zig-zag shape.

The Treasure Report written by Angie Bolton (PAS) and Dr Julia Farley (Curator at the British Museum) describes the ring as being similar to other larger and heavier British finds and note that this form of ring is more commonly seen in continental Europe – especially Switzerland where they are known to date to the period 400-200 BC. This suggests that the British finds could either be imported from the continent (given as a gift or exchanged during trade) or be a local copy of this continental style.

The British Museum science team examined the ring using non-destructive X-Ray florescence and found that the composition of the surface of the ring consisted of 85-87% gold, 8-10% silver with the rest being made up of copper.

“Very few finds of Iron Age date have been made within the county and those formed of precious metal are exceedingly rare.

“Responsible metal detecting has increased the number in the last 20 years and it is brilliant that Shropshire Museums’ will hopefully acquire this through the treasure process.

“We know the county has amazingly rich prehistoric and specifically Iron Age archaeology with numerous important hillforts – what we don’t have is a great understanding of where these people lived, traded and farmed – this tiny personal object throws a beam of light onto the individual who once wore it. We will never know their name or what they thought or looked like, but a little bit of who they were may be displayed in the museum for all to see.”

Shropshire Museums’ have expressed an interest in acquiring the find under the Treasure Act to be displayed in their prehistory galleries at Shrewsbury Museum and Art Gallery.

This brooch is also very small, but is packed full of beautiful craftsmanship and detail. 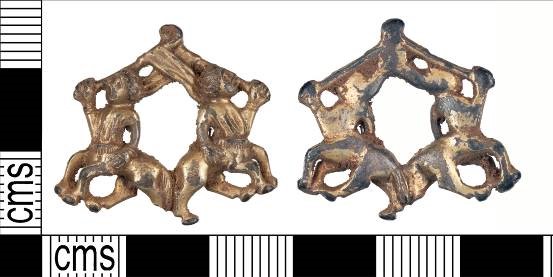 It was discovered by Mark Lambert on farmland near Bridgnorth whilst metal detecting, and was reported to Rebecca Griffiths – North Yorkshire FLO for the PAS – who wrote the treasure report for the coroner.

The brooch is hexagonal in shape measuring 24mm x 27mm and weighing 6.1 grams. The frame is made up of two opposing rearing centaurs (a mythical beast formed of half man / half horse). Each centaur is joined by their rear leg and their upper semi-naked human torsos form the edges of the frame. Both centaurs hold streaming club like pennants (banners) which join centrally at the top. The original pin is lost.

Similar openwork brooches with high relief designs comprising pairs of interlinked humans or animals date from the 13th century (AD 1200-1300). Several similar brooches are known – although none are exactly the same as this Shropshire example. The original pin of the brooch may have looped around the arm or waist of one centaur or possibly fixed at an angle around one pennant. It is equally possible give the significant number of pierced holes that the brooch was sewn to a garment almost like a badge.

“Given the small size of the brooch, a huge amount of incised and carved detail is present; this can be seen especially around the face and head showing the skill and craftsmanship of the original maker. The brooch has hardly any wear on it and looks almost as good as the day it was lost some 800 years ago.”

Shropshire Museums’ have expressed an interest in acquiring this brooch with the hope of displaying it either in the Medieval Gallery at Shrewsbury Museum and Art Gallery or at Much Wenlock Museum.

Now both these finds have been declared treasure they will be valued by the DCMS treasure valuation committee.

More detailed information as well as images of the finds please see the links below: