A harvest of finds: More Treasures from Shropshire

In addition to the inquest into the Shropshire Marches Bulla, Mr John Ellery, HM Senior Coroner for Shropshire,Telford and Wrekin, held two further Treasure inquests this morning (31/1/2019) into recent discoveries of archaeological finds.

All of these were reported via The British Museum’s Portable Antiquities Scheme (PAS) as a result of responsible metal detecting within the county.

The first case was a late medieval gold signet ring discovered in the St Martin’s Area of North Shropshire. The find was initially reported to Dr Susie White of National Museums and Galleries of Wales.

The ring is in stunning condition given that it was found in a ploughed field. The form of the ring fits with examples dated to the period AD 1350-1550 – many of which bear religious iconographic designs. They fell out of fashion at the reformation and are rarely seen or constructed after AD 1550.

This example is very large and robust weighing almost 16 grams. The bezel (centre) of the ring depicts a medieval windmill known as a post-mill as it sits on three substantial legs.

The design is well cut and would have acted as a personal seal matrix for impressing into wax to close or authenticate documents. The sides of the ring are further decorated with religious images of St Christopher and John the Baptist.

Inside the ring (on the reverse of the bezel) is the depiction of the Virgin Mary with the body of Christ in her arms. This hidden symbol would have been invisible when worn and would have been in direct contact with the finger of the ring’s owner. Each image is believed to protect the wearer. In this example the use of St Christopher would have protected the wearer from sudden death being the patron saint of travellers.

As the find was more than 300 years old when discovered and formed of precious metal (gold) with a content of more than 10% Mr Ellery declared the case Treasure under the 1996 Act.

The British Museum hope to acquire and display the find on behalf of the nation.

The second case heard was into the discovery of a silver thimble found in an undisclosed area to the south of Bridgnorth.

The decorated thimble dates to the mid-17th century and is formed from rolled silver sheet. 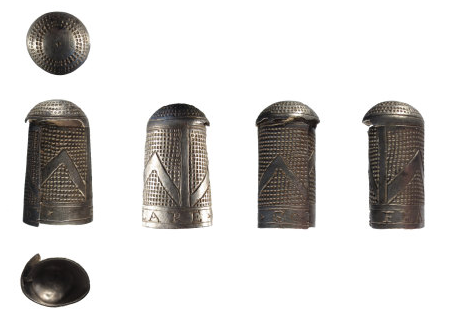 The body of the thimble is ornately decorated by three rectangular panels of lattice grid through which passes an inverted V shaped band forming a zig-zag pattern. Around the lower edge of the thimble is a short inscription which reads: FEARE GOD depicted in block capitals.

Although the piece is not hallmarked there is a maker’s mark – a capital R within a square shaped stamp on the inside edge.

“The thimble can be dated to the 17th century on the basis of style, spelling and the form of the seriffed capital letters, a form popular in the 1650s. The motto can be paralleled against other later 17th century silver artefacts including thimbles and posy rings.

“It’s also noted that: ‘thimbles with waffle-shaped indentations and religious mottoes are typical of the Commonwealth period (AD 1649-1660). Small objects such as rings and thimbles often bore improving mottoes such as ‘Feare God’, ‘Labour is profitable’ or Worcke is profitable.”

Dora Thornton (former curator at the British Museum) has stated that silver thimbles, increasingly used by nobility and gentry, were often donated by women on the Parliamentary side to be melted down during the English Civil War. Further, she notes that thimbles of this date are now rare discoveries but that they were imported from Holland into England in large numbers (145,000 in one year).

Again, Mr Ellery found that as the find was more than 300 years old when discovered and formed of precious metal (silver) with a content of more than 10% he declared the case Treasure under the 1996 Act.

Now that these two cases have been officially declared treasure – the next stage is for them to be independently assessed by a panel known as the Treasure Valuation Committee.

They will find the market value of each piece and the museums involved will be given the option to acquire them with the monies raised being shared jointly as a reward between the finder and landowner.

More information and images on the cases can be found here: