Royal award for fund that enabled £3.9m safety improvements on A529 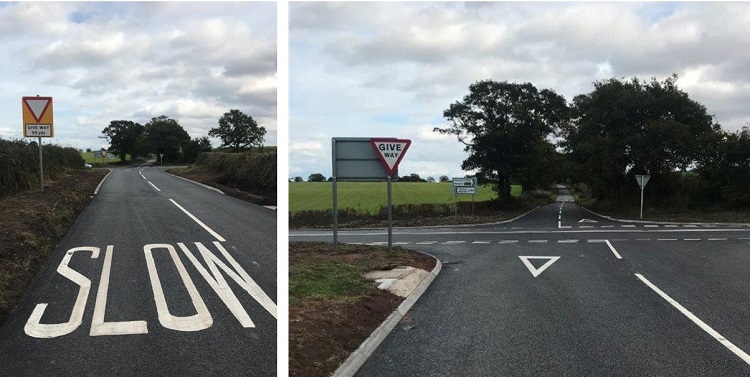 The Department for Transport’s Safer Roads Fund – which funded the £3.9m improvements on the A529 in north Shropshire – has won a prestigious Prince Michael International Road Safety Award for “outstanding achievement”.

The £100m Safer Roads Fund has enabled local authorities to improve the 50 most dangerous stretches of ‘A’ roads in England.

Work on the A529 between Hinstock and Audlem began in October 2019 and involved various safety improvement measures at key locations – including Mount Pleasant crossroads.

Work included junction and visibility improvements, and enhanced road markings and signing. The work was carried out by Kier, supervised by WSP and project managed by Shropshire Council.

In April 2021 DfT officials said they were very impressed with the efforts of Shropshire Council and its partners to meet the aims of the Safer Roads Fund and reduce the number of casualties on what was seen as one of the most dangerous stretches of road in the country.

“The award of this money from the DfT enabled us to carry out essential and much-needed safety work and reduce risk of injury or accident on this dangerous stretch of road – and the work has had a huge impact on safety.

“My thanks go to all the council staff and our partners Kier and WSP who helped to ensure the success of this work.”

In a letter to Dr Suzy Charman, Executive Director of the Road Safety Foundation, His Royal Highness Prince Michael of Kent said:

“I was delighted when the Westminster Government announced the Safer Roads Fund. The importance of sound investment at local level will provide many long-overdue improvements, not just in the 50 most dangerous stretches of ‘A’ roads in England, but elsewhere too. The innovative approach which the fund has triggered by bringing new methodologies to so many local authorities is indeed a step-change in practice and a huge stimulus to deploying a Safe Systems approaches by many roads authorities.”

“We are delighted that the DfT’s investment in the Safer Roads Fund is recognised with this award and hope that the fund will be replicated both here in UK and overseas.  We share this award with the RAC Foundation whose initial support allowed us to undertake the pathfinder project that was a catalyst to the Safer Roads Fund, and of course we also share the award with our local authority partners who worked hard to design and implement their schemes.”

The Safer Roads Fund programme focused on treating the 50 highest risk local A road sections in England with remedial road safety engineering interventions.  Together the Safer Roads Fund schemes are set to prevent around 1,450 fatal and serious injuries over the next 20 years.

The value of prevention for the schemes is £550 million compared with the whole life cost of treatments of £125 million.  The Benefit to Cost ratio for this portfolio of roads is estimated to be 4.4, meaning that for every £1 invested, £4.40 is returned in terms of societal benefit. This demonstrates how road safety interventions can compete favourably with other major transport projects.

The awards recognise achievements and innovations which will improve road safety. Established by HRH Prince Michael of Kent in 1987 and organised by RoadSafe, each year the most outstanding examples of international road safety initiatives are given public recognition through the scheme. www.roadsafetyawards.com