Shropshire Council’s flood and water management and highways teams are aware of the regular flooding affecting the Newport Road rail underpass in Albrighton. Works to investigate the cause of this issue have been undertaken and a scheme for alleviating the flooding is currently being developed.

The highway gully system serving the Newport Road railway underpass consists of several highway gullies located in the low spot. Although these gullies have recently been cleared by the council’s highway drainage teams, the cause of the flooding is a result of the poor condition of the downstream pipework.

The highway gullies serving Newport Road connect to a drainage system which runs alongside the railway embankment in a westerly direction towards RAF Cosford. This system includes several manhole chambers inside the railway fencing as shown in the plan below.

Investigations undertaken by Shropshire Council have identified a section of downstream pipework which is heavily affected by root ingress from the trees that line the rail embankment.

When tree roots enter pipework they cause an obstruction which can trap silt and other debris resulting in a reduction in capacity. If not managed they can completely block a pipe resulting in flooding. A root cutting operation was previously undertaken by Shropshire Council which alleviated the issue temporarily, and a scheme of works was drawn up to address this issue. However, it was not possible to deliver this scheme at the time. It is likely that the roots have now regrown and the system is no longer able to function.

In order to address the flooding issue Shropshire Council is intending to undertake works to root cut and cleanse the downstream pipework, and to install a liner to ensure that, once cleared, tree roots will no longer be able to enter the pipework and cause a restriction in capacity. Although relatively simple from an engineering point of view there are several reasons why this scheme has not been possible to date.

The drainage system serving Newport Road runs through several chambers in land owned by Network Rail. Due to the level of the highway, and the raised ground levels of the rail embankment, these chambers are very deep to ensure a fall on the pipework. Due to the age of the system (which would have been installed when the rail line was constructed) the chambers are very small, resulting in a difficult confined working space. Whilst these issues can be addressed though proper planning and working practices, approval of access to undertake the works has been problematic.

All of the chambers are located behind the security fencing associated with the rail line requiring Network Rail permission to work on their land on a live rail line. Access to this location is complicated further as it is via the Cosford site which is manged by the MOD.

Although it was previously not possible to agree access for Shropshire Council to undertake these works, the council’s flood and water management team have begun discussions with Network Rail’s drainage asset manager to ensure that the relevant permissions are in place for the proposed works to go ahead. Discussions with the MOD to access their land will follow this. Once agreed Shropshire Council will commission these works for delivery as soon as possible.

In order to re-open the highway the council’s contractors have been on site to pump out the underpass so the highway can be re-opened (see photo). The road is set to reopen this afternoon (Tuesday 15 October). 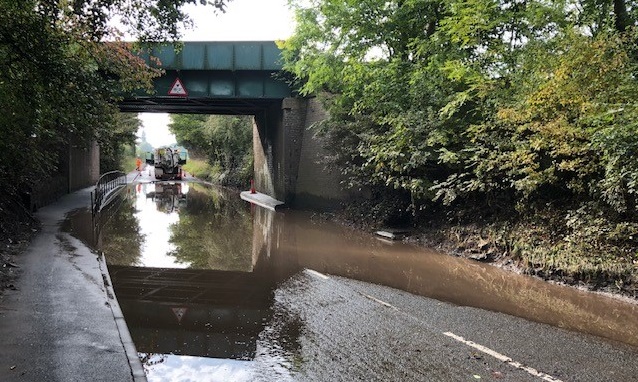 Whilst there is capacity in the drainage system to drain flows produced by small rainfall events, it is likely that the highway will continue to flood during heavy rainfall until the above works can be undertaken.

Shropshire Council is fully aware of the impact on the local community as a result of the continual closure of Newport Road. The council’s flood and water management and highways teams will be working to deliver this project as a matter of priority.