Timings for the Birmingham 2022 The Queen’s Baton Relay’s first visit to Shropshire have been confirmed.

The Baton will arrive for the first of two visits to the county when it is delivered to Shrewsbury Sports Village on Monday 18 July 2022 by a Juno helicopter flown by aircrew from Number 1 Flying Training School, from RAF Shawbury. It is scheduled to arrive at 4.38pm where it will make a lap of the cycle track.

The convoy will then travel in vehicles to the Flaxmill Maltings for a photocall arranged by the organisers.

From the Flaxmill Maltings the Baton will be transported around the town by a team of 28 specially selected Batonbearers from across the region. 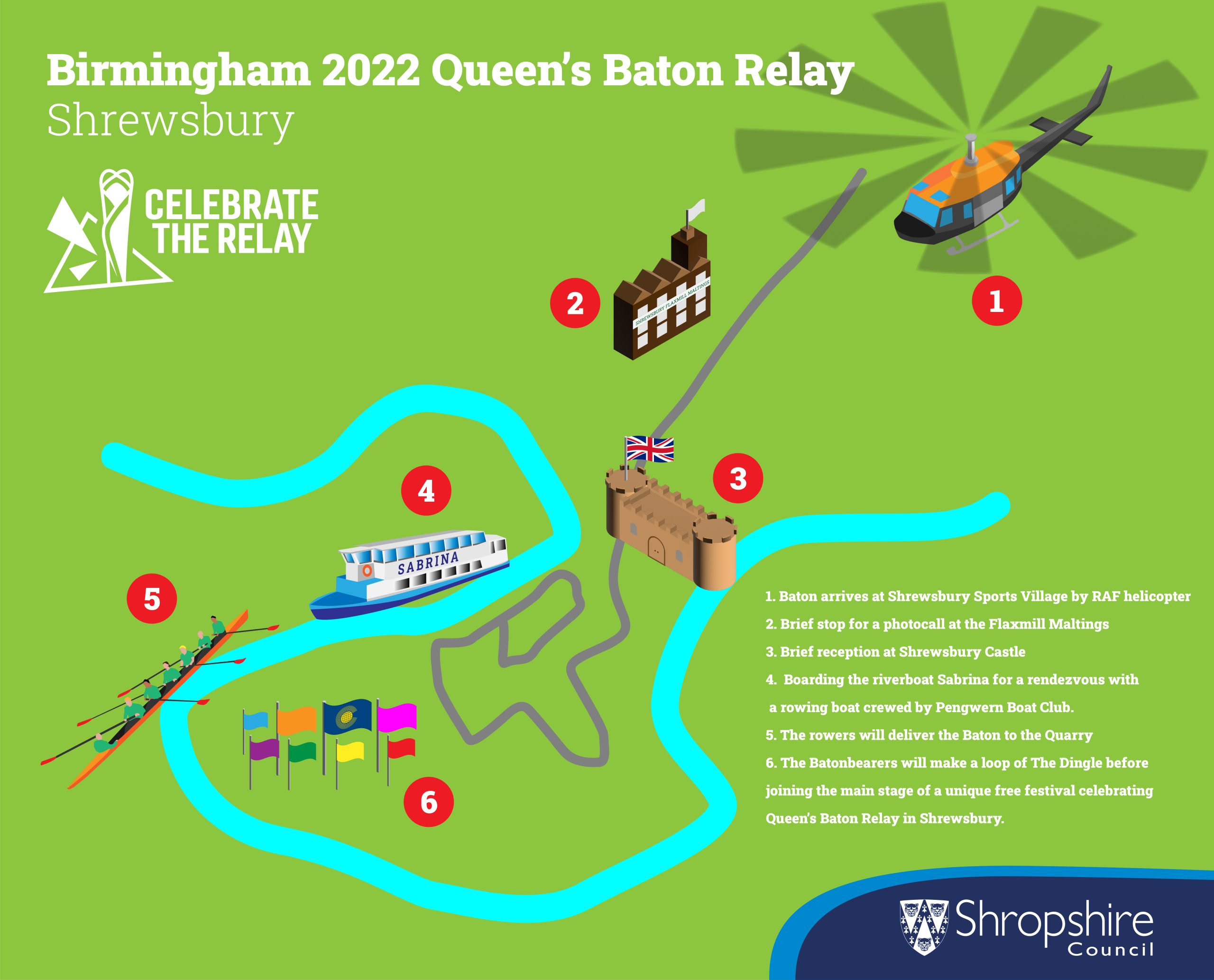 It will be carried into Shrewsbury Castle at 5.28pm for an official civic welcome by Shropshire’s Kelda Wood MBE.

Kelda, who founded the Climbing Out charity which supports people who have experienced life-changing mental or physical trauma after a serious accident, said:-

“Words cannot describe how proud I am to be given the honour of being a Baton Bearer for the 2022 Commonwealth Games.

“Due to my injury, any hope of competing in the games as an athlete was lost a long time ago, so getting the chance to be part of them as a Baton Bearer means the world to me!

“Carrying the Baton on home turf after its epic journey across 72 nations will be a moment I will cherish forever. I’m immensely proud to be part of The Queen’s Baton Relay.”

The Baton will go to Victoria Quay ahead of boarding the riverboat Sabrina at 6.10pm for a rendezvous with a rowing boat crewed by Pengwern Boat Club. The rowers will deliver the Baton to The Quarry at 6.43pm, where the Batonbearers will make a loop of The Dingle before joining the main stage of a unique festival celebrating Queen’s Baton Relay in Shrewsbury. It will depart at approximately 7.13pm.

Another local Batonbearer is Ron Morgan, who was nominated for his charitable work through Dreamcatcher Children.

“We were surprised, to say the least, and humbled to have been selected to be Batonbearers. It is so kind and we are looking forward to taking part.

“Dreamcatcher Children was set up to help local children and their extended families and we just want to be able to brighten their lives as much as we can.”

In Shrewsbury, Shropshire Council has teamed up with Energize Shropshire Telford & Wrekin, Shrewsbury BID, Shrewsbury Town Council and Shropshire Festivals to create a community celebration in The Quarry from 4pm to 9pm.

Schools, sports clubs, arts organisations and local groups from across the county will be taking part in the festivities. Crowds can expect to be entertained with dance, arts, music and sports, and there will be food and drink stands showcasing local suppliers.

Details of the free ticketed event can be found here: The Queen’s Baton Relay and Shrewsbury Celebration Event Tickets, Mon 18 Jul 2022 at 16:00 | Eventbrite

People are being advised that there will be some road closures as The Queen’s Baton Relay travels through town, more details and advice will follow.

The Queen’s Baton Relay returns to Shropshire in Bridgnorth on Saturday 23 July 2022 where community sports and wellbeing groups will be laying on taster sessions in Severn Park.

An accident in 2002 left Kelda with a leg injury that ended her dreams of becoming an Olympic horse rider. After rebuilding her confidence, Kelda changed her focus and eventually retrained as an outdoor instructor. In 2010 she launched the charity Climbing Out to help people who have been through life changing mental or physical trauma. The 5-day outdoor activity programme offers funded places to enable participants to rebuild their confidence, self-esteem, and motivation.

Since sustaining her injury, Kelda has represented Great Britain as a member of the GB Paracanoe squad and was selected as a member of the Adaptive Grand Slam Team climbing Aconcagua, the highest peak in South America. In January 2017 she became the first recorded adaptive female to summit the mountain.

In December 2018, Kelda set off to row solo across the Atlantic with the aim of inspiring others, raising awareness about mental and physical trauma, and raising funds for Climbing Out. Each day she rowed for a different young person. 76 days later, Kelda had rowed 3,500 nautical miles, becoming the first para-rower to solo row the Atlantic. She raised over £50,000 for Climbing Out in the process. Her charity’s motto is, ‘It’s not about saying I can’t, it’s about saying how can I?’

About Ron and Dianne Morgan

They also support children’s charities in South Africa, India and Myanmar. In March 2015 Ron was diagnosed with stage 4 bowel cancer and was offered palliative care. After taking alternative advice and undergoing chemotherapy and operations to remove 70% of his liver following a full bowel resection, he has since undergone some 50 cycles of chemo but continues to support those less fortunate children.