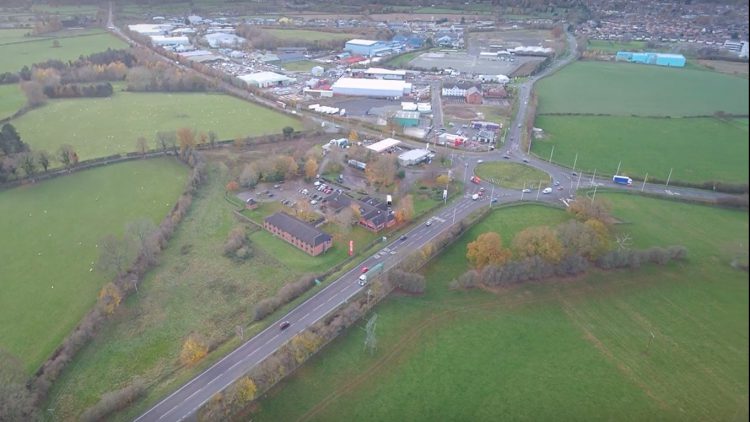 Major improvements to Mile End in Oswestry, one of the busiest roundabouts in Shropshire, have moved a step closer with the appointment of a construction firm.

Shropshire Council is due to appoint Balfour Beatty to construct the improvements to the Mile End roundabout, which joins the main A5 and A483 trunk roads, as well as the B4579 Shrewsbury Road into town.

The works will see traffic diverted from the A5 offline to a new four-arm roundabout approximately 75 metres to the north-east of the existing junction, with a link road to the current roundabout. The new roundabout will allow traffic using the A5 to bypass the existing Mile End roundabout and provide access to the proposed Oswestry Innovation Park.

The new layout will achieve several objectives for Shropshire Council, including enabling existing housing proposals to be brought forward, and enabling the proposed Innovation Park.

It would also enable additional employment opportunities in Oswestry during the construction period and beyond, while also enhancing the gateway into Oswestry and relieving congestion at the roundabout.

“We are so excited to be in a position to announce that we are due to appoint Balfour Beatty to construct this major project for us in Oswestry.

“The planned upgrade to the Mile End roundabout will be a massive step forward in our plans to boost Oswestry as a place to live, work and visit and concentrate on its economic growth going forward.

“The roundabout as it is can become very busy and this will not only relieve that stress, but will also open up possibilities to bring this end of Oswestry into the future and provide a gateway to the town for workers and visitors alike.

“The work will enable the proposed Innovation Park which will bring potentially hundreds of new jobs to the town and also the planned housing proposals. This is a really positive step forward for Oswestry and I am looking forward to seeing the work starting.”

The current Mile End roundabout is a five arm roundabout with one unused exit. Housing sites already allocated through the current Local Plan in Oswestry require improvements to the road network to enable approved sites to be developed.

Shropshire Council has accessed funds from the Housing Infrastructure Fund (HIF) through Homes England and the Marches Local Enterprise Partnership (LEP) for this project.

Residents may have noticed that work has already begun in preparation for the work, including ecological and archaeological work with the relocation of great crested newts, the erection of a boundary fence and planting.

Work is expected to last for a year and traffic calming measures will be introduced when work begins in January 2021, including 40mph speed limits on all approaches to the roundabout. Although most work will take place away from the carriageway, some overnight closures and diversions will be in place occasionally. These will be notified in advance.

A newsletter is currently being delivered to homes and businesses in the area with further information.